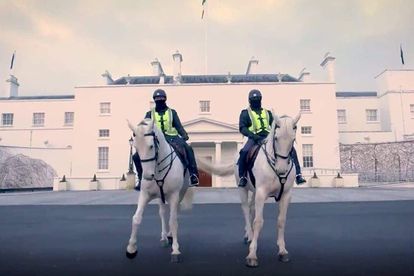 A video of the Irish police force or Gardai doing the Jerusalema dance challenge across Ireland went viral on social media after notching up more than 10 million views and even praise from the Swiss police who said the dancing Irish cops “absolutely nailed it”.

The video shows the Irish police officers, positioned two metres apart to adhere to social distancing, dancing to Master KG’s Jerusalema in full Irish style. In the Gardai’s take on the dance challenge, even the police horses are doing the Jerusalema!

‘Jerusalema’: ‘You can’t help but smile’

The Swiss police force had challenged Ireland to get moving to the beat of Jerusalema and Garda Mary Gardiner, from Kerry County in the southwest of Ireland, got going and organised the challenge.

In the video, Gardiner and her “dance crew” take the dance challenge to “new heights” by even showing off their moves on the rooftop of a building.

“The whole purpose is to put a smile on the face – even listening to that song, you can’t help but smile,” said Gardiner to The Irish Sun.

“There were guards in it from Thomastown, Sligo and the Garda College – where you see the fabulous Irish dancer, who I believe was a former member of ‘Riverdance’,” she added.

The former Riverdance member has been identified as Orla Clarke McDonald who told Independent.ie that the reaction to the video has been “very emotional” and that she will always look back on the video with “great pride”.

The Gardai further opened up the Jerusalema dance challenge to the public of Ireland to help lift the spirits of the nation through lockdown with 89-year-old Irish gran May Kenna showing off her moves in her hometown of Moneystown, Co Wicklow.

Staff and residents at the Ealga Lodge nursing home in Offaly have also called on “all nursing homes in Ireland” to submit their own Jerusalema Challenge dance videos.

An 11-year-old Irish boy named Evan O’Driscoll who loves his Lego, decided to make his Lego figurines dance to the Jerusalema challenge.

His Jerusalema Lego challenge consists of five emergency figures who dance to Jerusalema, each individual step had to be filmed separately and then combined into one continuous video.

WATCH THE LEGO’S DANCE TO JERUSALEMA