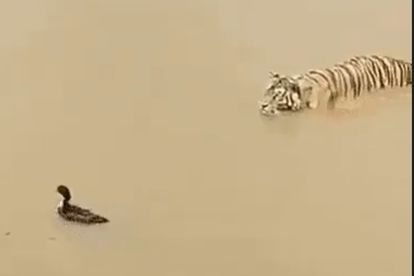 A funny video of a duck giving a tiger the slip went viral on social media. Image via Twitter @buitengebieden

A funny video of a duck giving a tiger the slip went viral on social media. Image via Twitter @buitengebieden

A video of a hungry tiger and a quirky duck playing hide has attracted the attention of netizens on social media.

Side note: the hide and seek is involuntarily for the tiger.

NOW IT MAKES SENSE WHY IT’S CALLED A DUCK

The short clip, which shows the smart little duck giving the big tiger a slip, is only 10 seconds long but it has attracted over two million views on social media.

In the short video, the tiger is seen approaching the duck which is swimming in muddy water. The sneaky predator very carefully moves toward the bird, which appears to be unaware that it is in possible danger. But, as soon as the carnivorous animal gets ready to attack, the duck takes a dip and disappears into the water. The surprised tiger looks around, but can’t seem to find the bird and in a second, the bird emerges behind the tiger safely exiting the danger zone.

Watch the funny clip below:

“The disappearance was good. The coming up behind the tiger and calmly swimming away was beyond awesome,” one tweep wrote.

While another Twitter user said: ” Duck was so confident that it didn’t even bother to fly away. Just leisurely paddling away.”

According to NDTV, others were, however, angry claiming that the wings of ducks are clipped by some zoos in other parts of the world and thrown into pools for tigers and entertainment of visitors. These users also posted links to some YouTube videos. On video shows a duck giving a slip to not one but three tigers in a zoo in China.