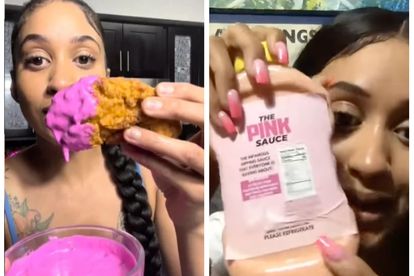 The latest TikTok food trend – pink sauce – has been blowing up on social media…but for all the wrong reasons.

The brightly-coloured food condiment has gone viral on the video-sharing app, but has also attracted cause for concern from health and safety regulatory bodies.

Developed by TikTok foodie Chef Pii, pink sauce is just as it is described – pink sauce.

The private chef posted a video in June of her pouring the fuchsia product over fried chicken before devouring it.

Since then, it’s blown up and Chef Pii has created her own company selling the viral product.

According to the Miami-based foodie, the sauce has a pink tinge, allegedly over it’s inclusion of dragon fruit and Himalaya sea salt.

And whilst she “can’t” describe what it tastes like – some have compared to a mayonnaise .

But whilst Chef Phii has boasted about her booming business selling pink sauce, experts are warning that consumers should stay far away from it.

According to the US Food and Drug Administration body that regulates if commodities are “safe, wholesome, sanitary and properly labelled”, pink sauce has raised several red flags.

The include concerns of:

Health experts are also warning that pink sauce can cause botulism -a serious food poisoning causes by toxins which affect the body’s nervous system and can result in breathing, muscle paralysis, and even death.

Food safety expert Professor Benjamin Chapman told Health: “In food like this, when you see low-acid foods like raw garlic or dragon fruit being put in a high oil content, we’ve seen similar products lead to botulism in the past without any acidification of those low acid foods”.

He continued: “What’s really unknown or unclear is the pH of this product. Some people say on TikTok that when the bottle is opened up, it pops or fizzes, or a gas formed. That’s an indication that there could be a growth of pathogens.”

Following the backlash, Chef Pii took to TikTok to respond to the reports.  But her response was even more startling than the concerns themselves.

Reacting to claims her product was not regulated or approved, she said: “What do you mean FDA approved? I don’t sell medical products. Pink sauce is not a medical product. Pink Sauce doesn’t contribute to your health. I never said that, did I?”.

ALSO READ: Gordon Ramsay slammed for TikTok of himself choosing lamb for slaughter