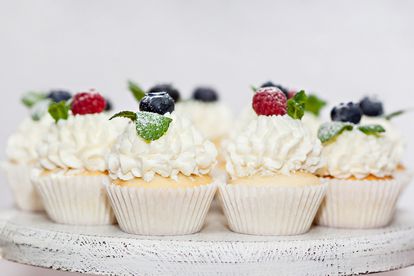 It might be winter in South Africa but we love inviting friends over and enjoying great food and sweet treats. A great traditional South African treat is mlektert or milk tart which is sweet with a hint of vanilla and cinnamon. We’ve turned the tables a bit and made some melktert cupcakes. They’re the bite-sized, hand-held treats you’ve always been looking for. Combining party-friendly cupcakes and our favourite dessert has never been this successful.

More about your melktert cupcakes

You’ll be making your cupcakes from scratch but you can still use a box of vanilla cupcakes. The real flavour comes from the custard and buttermilk mixture you’ll be making for the icing. The custard is easy to make but remember to very slowly add the eggs to the warm mixture so that they don’t scramble. Buttercream is also easy to make and just adds more flavour. Top your cupcakes with the icing in your most creative way and enjoy.

A party always needs dessert or sweet snacks and cupcakes are the way to go. We added a twist and made some melktert cupcakes and you can too!

Indulge in the goodness South African food has to offer and try out our vast variety recipes on our recipe page.

Or, if you would like to submit any other recipe for publication, please complete our recipe form here.