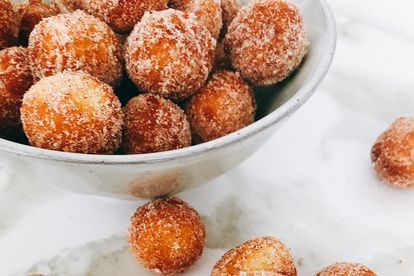 We all crave something sweet and doughnuts are some of the ultimate treats out there. However, what do you think happens to the middles they cut out of the centre? They’re often called doughnut holes and some shops sell them on their own. But, did you know that you can just make doughnut holes yourself without the hassle of making the whole doughnut? These Cinnamon Doughnut Bites are light on the inside, crunchy on the outside and taste like pure childhood joy.

This Cinnamon Doughnut Bites recipe includes an easy doughnut dough recipe so you can make the most delicious treats for your family and friends. The rising time in the recipe below includes both rises. As you work the dough, you flatten it out and having two rises/proofs, your doughnut bites will be perfectly fluffy on the inside. Do not overcrowd the oil with too many bites but they fry very quickly, so don’t worry that it will take a long time. This recipe makes 60 of these delicious doughnut treats.

Doughnuts are the ultimate treats, but you definitely want them to be bite-sized. Try our homemade Cinnamon Doughnut Bites this spring!

Are you in the mood to bake some more spectacular dessert treats? Just have a look at our recipe page, we have excellent suggestions for you to try.