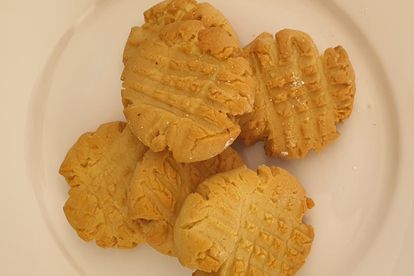 Add some mouth-watering sweetness to your Easter weekend with these hokey pokey biscuits. These tasty bites remind one of hokey pokey flavoured ice cream which is so popular in Nieu-Zealand. Basically, hokey pokey ice cream is vanilla ice cream with small, solid lumps of honeycomb toffee.

Melting the butter, sugar and golden syrup together until almost boiling results in a delicious caramel-like flavour. This adds a delicate flavour to these cookies. The best part is that it does not even take 30 minutes to whip together these cookies.

The origin of hokey pokey biscuits

These delightful biscuits got their flavour from the hokey pokey ice cream which is the second most popular ice cream flavour, after vanilla, in Nieu-Zeeland. The origin of this term with regards to honeycomb flavour is not known with certainty.

Interestingly, in the 19th and early 20th centuries, “hokey pokey” was a slang term for ice cream in New York and parts of Great Britain. The street ice cream vendors were oftentimes referred to as “hokey pokey men”. Many of the ice cream street vendors were of Italian descent and it is rumoured that they used a song involving the phrase “hokey pokey”.

​So, these tasty cookies got their delicious flavour from ice cream sharing the same name. One bite of these crispy biscuits and you will enjoy a slight fizz on your tongue thanks to the baking soda and golden syrup.

Love these tasty cookies as much as we do? Have a look at our recipe page for more delicious recipes to prepare for your family and friends.