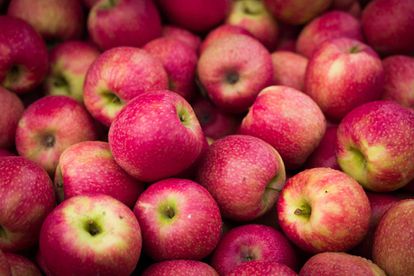 Apples have various health benefits that can reduce the risk of major diseases. We have a look at just seven on the reasons why you should be eating an apple a day.

Apples can lower the risk of heart disease

The soluble fibre that is found in apples can decrease cholesterol and blood levels. Polyphenols that are found in the peel have antioxidant effects. Flavonoid epicatechin which is polyphenol can lower blood pressure. Studies have shown that a high intake of flavonoids reduces the risk of a stroke.

A lower risk of diabetes

Studies have linked the consumption of apples to a decreased risk of Type 2 diabetes — a 28% lower risk. Polyphenols that are found in apples prevent damage to Beta cells. Insulin is produced by beta cells, which are usually damaged in people with Type 2 diabetes.

Plant compounds that are found have been shown to lower the risk of cancer. Lower death rates from cancer can be linked to eating the fruit. Their cancer preventative effects can be attributed to their antioxidant and anti-inflammatory effects.

Compounds that are found in apples can help fight asthma

Oxidative damage in the lungs can be prevented. Studies have reported that eating an apple a day can lower the risk of asthma by 10%. The skin of the apple which contains flavonoids helps to regulate inflammation and the immune system.

A higher bone density has been linked to eating apples. Bone density and strength can be promoted by the antioxidant and inflammatory compounds which are found in the fruit. Studies have shown that people who eat apples regularly are less likely to lose calcium than those who do not.