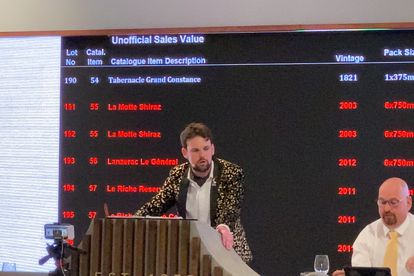 This weekend, a devoted wine enthusiast splurged almost half-a-million rand on 375ml of Grand Constance – one of the rarest bottles known to man. The 200-year-old treasure – initially sourced in Constantia, Cape Town – will now take pride of place in someone’s cellar. But what exactly makes it worthy of the R420 000 price tag acquired in Stellenbosch?

The method behind the madness: Here’s why one punter just paid R420 000 for a bottle of wine…

Nederburg MD and CFRWA director Niël Groenewald set the scene nicely for us beforehand. Ahead of the rare wine auction, he explained that the bottle presented a ‘once in a lifetime opportunity‘ for the die-hard vino enthusiasts.

“A treasure of this calibre presents itself perhaps once in a lifetime, and anyone lucky enough to secure this wine at auction will be rewarded with an unbelievably valuable piece of wine history.” | Niël Groenewald

The Grand Constance was a big hit amongst some of the most important people who ever lived – and it was a desired commodity for the French ruling classes. Everyone from Napoleon to Marie Antoinette is believed to have sampled this blend over the years – and it has a history as rich as its centuries-old composition:

The History of the Grand Constance Wine

Luckily, the exhilarating moment this bottle went under the hammer was captured on film: A stunned silence sweeps across the audience, as the auctioneer dramatically sets the stage. After fending off a bid of R410 000, the bidder held their nerve and went just a little bit higher, reaching the record-breaking figure without any further challenges.

A single 375ml of Grand Constance 1821 just went under the hammer for R420,000 @CapeFineWineAuc pic.twitter.com/hgvksKndjv