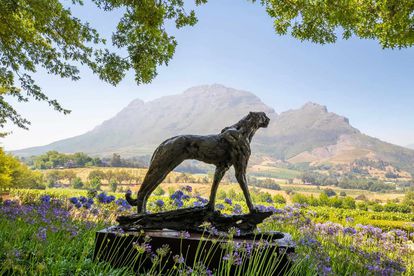 Dylan Lewis’ bronze cheetah sculpture is but one of the sculptures adorning the gardens of the Delaire Graff Estate, Image: www.delaire.co.za

Dylan Lewis’ bronze cheetah sculpture is but one of the sculptures adorning the gardens of the Delaire Graff Estate, Image: www.delaire.co.za

Much has been written about Delaire — from the art collection to the gardens, the food to the views, and the challenge for many a writer is finding enough superlatives without repetition. Delaire Graff is simply jaw-droppingly magnificent throughout.

Let us however take a “wine-perspective” glimpse at this incredible investment and what impact a property like Delaire has had on wine on the Cape Winelands.

After nearly 300 years of “consistently average” wine production, it was only with the introduction of the Wine of Origin scheme in 1973 that we started a serious focus on quality production.

For the next 25 years it was the Rustenbergs, Kanonkops and Meerlusts who were out there in the front row, carrying the flag and establishing that continuity of excellence…so important if we are to be accepted on the world stage.

Investment in property, people and product

Come the mid-1990s the first big “outside” investments in wine estates started taking place causing more than one fourth generation vineyard owner to have complained about all this “money” making it difficult for him to compete.

Many of these new wine estate owners may well have been serious wine drinkers and with great collections, but few had any “hands-on” experience.

What they did have, however, was serious intent to make great wines, knowing this would be a long-term investment. It was GT Ferreira who famously coined the phrase that “in the business of wine farming the acronym ROE has a different meaning: Return on Ego”.

These investments in property, people and product have been HUGELY important, and now more than 20 years on, those with generational investment in the Winelands realise just how much this has meant to both farming and tourism.

DELAIRE GRAFF: THE VIEW AND THE VISION

In was in 2003 that the British maestro of the jewellery world, Laurence Graff (chairman of the board and director of Graff Diamonds International), had his first sighting of a property called Delaire – exquisitely situated at the top of the Helshoogte Pass, Stellenbosch.

Seven years later, he opened the most sumptuous and luxurious winelands venue South Africa had ever seen, and a property that was to make a huge impact in the Cape Winelands — not only in terms of wine, but in terms of art, environment, fine dining and above all, hospitality. Simply put – we had never seen anything like it!

Getting the right people for Delaire Graff journey

Looking through the wine glass, and again, from a wine producer prospective, how did Laurence Graff manage to get it so right and in a relatively short time?

Firstly, he appointed the right people to accompany him on his journey.

CEO Johann Laubser was the key appointee in the process and together he and Laurence put together a first league team of people to deliver the goods.

While there was no restriction on finances, this came along with the unquestioned expectation of excellence in each and every aspect, down to the smallest detail.

Winemakers, viticulturalists, chefs – all were given opportunities to visit or to liaise with their counterparts wherever in the world in the quest for excellence.

THE REPUTATION THAT CAME BEFORE

However, the Graff heritage and ethos brought  along something that no other big investor had brought along before. It brought an international  reputation and existing client following previously unknown in the Winelands.

The in-house magazine Graffiti, edited in London, is sent out to tens of thousands of their global followers — people who are well-read, well-travelled and can both afford and expect the finest and the best. They shop at Harrods and Fortnums (where naturally, the wines are listed).

It is this confidence in the Graff marque that led these people, when visiting South Africa, to make their destination someone in whom they already had confidence.

Well over 100,000  people have visited Delaire Graff each year before international travel took the big knock and this is how the greater winelands has reaped so much benefit – no one comes to South Africa just for a day, and not one who visits the Winelands never gets carried away to explore further.

The ripple effect of this in terms of tourism in general, and also employment in the hospitality industry has been huge. Equally so has been the ripple effect internationally, with all of these visitors returning home as ambassadors to the splendid things they have seen during their visit.

The casual tourist might understandably have a sense of awe and trepidation on first visiting such a seemingly opulent venue.

But the moment you walk in the door you will feel the warmth and friendliness of a genuine welcome evident everywhere you walk. Indeed – it is quite strange, in theses almost overwhelming surroundings, you will feel undeniably at home.