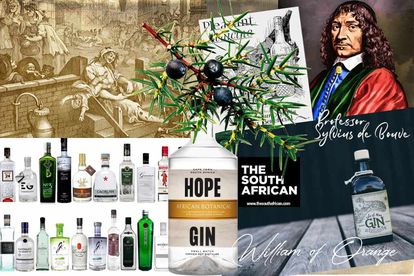 Nowadays, gin is known for being the liquor that accompanies tonic water, or finds its way into a trendy cocktail. But if we look at the history of this popular spirit, we find that this distilled alcoholic beverage has a rich past.

Most people wrongly assume that gin originated in England, but even though it was popularised there, in reality,  gin as we know it today, actually comes from Dutch soil.

Professor Sylvius de Bouve is widely credited with the creation of what we would recognise today as genever, and so by extension, gin, in the 16th century.

Now the good professor was a chemist, alchemist and renowned scholar at the Leiden University, in the Netherlands. He added juniper oil to grain spirit to concoct what he called genièvre (with 50% alc/vol) to be used as a tonic, diuretic and treatment for lumbago and gout.

For the time, it was very high in alcohol, but the taste was nothing to write home about although it was hailed as a sort of “wonder drug”. Because of the bad taste, people were forced to add botanical ingredients (mainly juniper berries, but also coriander seeds, angelica root and orange peel) just to make it drinkable.

England became a market for Dutch genever from the 1570s onwards as sailors travelling between ports brought genever back with them.

Aiding in developing a taste for genever was the Thirty Years War during which the English were fighting alongside the Dutch against the Spanish. British troops soon became familiar with genever, drinking it ahead of battles to fight fear and fatigue. Hence the phrase “Dutch courage”.

However, it was only in 1968 that genever became truly fashionable when the Dutch King William of Orange or William III sat on the English throne.

He boycotted imports of brandy produced in enemy France and the popularity of genever grew in leaps and bounds in England. So much so that records of the time report that Dutch distillers loaded their genever on ships headed to England as soon as it was produced instead of letting it “rest” for a couple of months as used to be the custom.

In 1690, the monopoly of the London Guild of Distillers was ended which resulted in the explosive growth in the number of small distilleries. The English started mass producing a juniper-based spirit that was significantly lower in purity than the Dutch genever.

It was around this time that the English decided to start using the shortened name of “gin”, because of the difficulty they had with the pronunciation of genever.

Around the early 1700s, gin was so cheap (cheaper than beer and safer to drink than contaminated water of cities), that it was even enjoyed by the poorest of British society.

The first known written use of the word “gin” appears in a 1714 book called The Fable of the Bees, or Private Vices, Publick Benefits by Bernard Mandeville:

“The infamous liquor, the name of which deriv’d from Juniper-Berries in Dutch, is now, by frequent use… shrunk into a Monosyllable, intoxicating Gin.”

This excess use of gin led to the Gin Craze in the mid-18th century. By 1730, there were roughly a staggering 7,000 gin shops in London alone.

There were historic reports of violence, widespread addiction, and social destruction due to the Gin Craze that has been compared to the 1980s crack epidemic in the United States.

The revulsion of the state of affairs in London was depicted in a print by William Hogarth in 1751, titled Gin Lane. It illustrates a drunken woman with infected legs, inhaling snuff as her infant tumbles into the gin-vault beneath.

When the parliament passed the first Gin Act in 1736, the nation rioted from Bristol to London, Norwich to Warrington and Liverpool to Plymouth with mock funeral processions held by some in protest to “The death of Madam Geneva”.

Despite this first regulatory action, gin addiction continued to rise and reached an all-time high in 1743 when it was recorded that 70 million litres of gin was produced over a population of six million.

It was also estimated that one in five people in London was illegally distilling gin at home, commonly in their own bathtubs.

With the second official Gin Act of 1751, parliament raised taxes and fees for retailers and made licences more difficult to come by. In addition to beer, the consumption of tea was promoted…

The retail tax on gin was raised to five shillings per gallon which pushed gin manufacturing underground. Due to the closure of many public gin shops and distilleries, Londoners turned to the local black market where a new popular sweetened version of gin, known as Old Tom, became available.

He came up with the idea for local pubs to put small taps, called “puss & mews”, under a copper plaque of a cat or its paw in the side street next to their establishment. The customer would then slot through a coin, call “puss”, the bartender would reply with “mew”, and then pour through a shot of Old Tom gin.

In 1830, a French-born Irishman named Aeneas Coffey introduced a new still that modified the existing continuous column still and essentially revolutionised liquor production around the world

The new still could yield a much more neutral grain alcohol that did not require sweetening agents to be palatable. Dry gin was born, and since it was first only produced in London, this style is still referred to as “London Dry”.

For the first time, gin was seen as a more refined, classy drink. Gin sales were doing well, and in 1870, the first American Dry gin was produced.

The iconic gin and tonic mix finds its roots with the British Royal Navy.

In 1857, the Brits took over full governance of India. Early immigrants struggled with the tropical climate and the ravages of malaria – not to mention scurvy after the long sea voyages.

England’s sailors brought quinine rations to help prevent and fight malaria. But quinine tasted notoriously bad, so Schweppes came out with an “Indian Tonic Water” to make it more palatable.

London Dry gin accompanied the sailors on these voyages and it didn’t take long before the two liquids were combined to form what is now a classic gin cocktail.

Limes were added for their anti-scurvy properties. This led to the making of cordials to preserve the limes, and lime cordial and gin were next on the list of the soldiers’ tasty mixes…and so, the gimlet was born.

With the start of World War 1, the gin industry took a massive knock as grain was prioritised as cattle feed instead of for the production of liquor.

Most gin companies completely shut down, but in 1918, after World War 1, gin production slowly started to pick up again, with distilleries such as Beefeater, Gordon’s, and Tanqueray reopening their doors.

When World War 2 broke out in 1939, the industry collapsed again. This time around, mostly from factories being bombed.

During the Plymouth Blitz of World War 2, the German bombing raids completely destroyed Plymouth Gin’s offices and archives, but the distillery ultimately survived.

During World War 2, while the Germans were bombing London in the Blitz, they were also bombing Plymouth because of the large British Royal Navy base there,” Robby Nelson of Plymouth Gin said in an interview with fordsgin.com.

“Plymouth gin was so beloved by the Navy that, when the fleet was notified that Plymouth had been bombed, one sailor said, ‘Well, Hitler just lost the war!’ ”

Such was the esteem the English had for gin at the time. “Bombing London was bad enough, but attacking the home of the navy AND their gin was completely unacceptable,” Nelson added.

Things calmed down during the course of the second half of the 20th century. The 1990s marked the start of a new cocktail revival in large international cities.

Gin consumption today is not lethal or hysteria-inducing. Instead, it has been re-adopted as a highly in-demand cocktail ingredient.