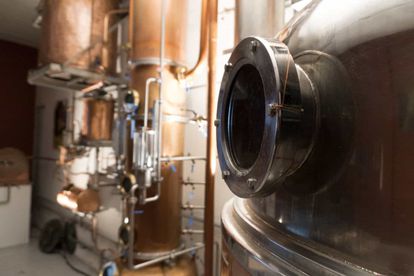 Gin, the popular distilled alcoholic drink which obtains its distinct flavour from the juniper berry, originated as a medicinal drink dating back to the 11th century.

Originally, gin was made by many simple distillation processes which included using alcohol to dissolve and preserve plants. Gin became such a popular spirit that it moved on from being used for medical purposes and became commercially produced, to the extent that the gin productions became more and more refined over the years.

The production of a respectable distilled gin involves a two-phase method.

Firstly, a basis “neutral spirit” is produced and then this is given flavour using re-distillation with herbs, spices, seeds, berries, roots, and fruits (together known as “botanicals”).

What is the base spirit? This depends on the type of gin being produced.

The most common ingredient used for the base spirit is wheat, but some use barley, grape, sugar, and others. In the case of grain alcohol, the mixture commonly consists of grains such as corn (75%), barley (15%), and other grains (10%), including rye.

The most important characteristic of the base spirit is that it needs to taste neutral for the flavours of the botanicals to come through.

There are two main methods of adding the botanical flavours to the base spirit, namely maceration, and vapour infusion.

The botanicals are soaked in the base spirit in the still for some time. You have the option of soaking them in another container and then pumping them into the still, but then the pump has to be able to manage solids.

This process usually takes one day, but can differ depending on the distillery. The botanicals can be soaked whole, chopped up, or crushed. However, the finer the botanicals, the greater the extraction from their compounds will be.

This sounds like a simple job, but botanicals are often not consistent all the way through. A seed might have a specific flavour on the external skin, but quite an opposite flavour inside if ground up. A great example of this will be an orange.

The peel tastes very different from the inside. If you decide not to grind up the seed, most of the extraction will be from the exterior layer. The plus side to this is that you have a limitless amount of combinations. Once the botanicals have been saturated in the strong base spirit, the still will be heated up.

The alcohol and mixtures obtained from the botanicals will be carried over as a gas into a condenser, which merely cools the vapour down, returning it to its liquid state.

Different from the maceration method, the vapour infusion method places the botanicals in a container overhead the base spirit in the still.

When the still is heated up, the alcohol steam will go through the botanicals, obtaining some flavour, sending it to the condenser to be cooled back into a liquid. This botanical-holding container can either be a particular thin metal mesh bag hung inside the still, without touching the liquid, or a solid metal container joined to the still boiler using a metal cylinder.

The biggest difference is that the vapour fusion method uses a lower temperature, which means the botanicals are steamed less, which is not automatically good or bad, it just amounts in different flavours.

Every distillation can be split into three steps:

The heads, also known as the “foreshots”, contain the first portion of each distillation. Dependent on the value of the spirit being distilled, the heads can include rough chemicals, such as acetone or toxic methanol, which is unfavourable in gin production. The distiller will remove them, and either discard them or redistill them at a later stage.

The heart, or the middle cut, follows the heads and is the highest-quality part of the batch of gin. Most distillers take a very small heart cut to use in their gin, to ensure the end spirit is full of flavour and very smooth.

The final part of each distillation is the tail, also known as the feint. This is usually quite low in ABV (the azeotrope of water and ethanol) and contains unwanted sulphates and fatty chemicals that taste very heavy and oily on the palate. Same as the heads, the tails are removed and either redistilled or thrown out.

After the alcohol-botanicals mixture is distilled, the gin is left to rest for a few hours in the barrel, then its alcohol content is steadily lowered by dilution to the preferred ABV.

Cold filtration may be used by cooling the spirit to -2°C, and then pumped through a fibre filter intending to remove any scraps in suspension.

One can also use other filtration methods, such as activated carbon, by allowing the spirit to run through sheets of carbon.

Now the gin is ready to be bottled!