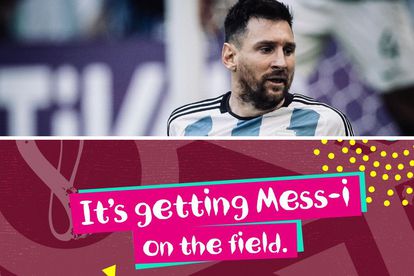 Nando’s has poked fun at Lionel Messi and team Argentina for their loss in their first World Cup match.
Images via Twitter
@wearemessi/@nandossa

Nando’s has poked fun at Lionel Messi and team Argentina for their loss in their first World Cup match.
Images via Twitter
@wearemessi/@nandossa

Team Argentina -including star player Leo Messi – has not only taken a beating in their first World Cup match, but on the social media streets too…

It’s only the first week of the Fifa World Cup, but team Argentina and star player Lionel Messi have already become the laughing stock of the competition after flouncing their first group stage match against Saudi Arabia.

The football favourites to win the trophy lost their first match 2-1 to the Middle Eastern country.

The loss marked an end to the country’s 36-game undefeated streak.

Pics and clips of sombre fans in the stands – and the defeated national team – quickly went viral.

And so did the celebrations of Saudi Arabian fans who were seen singing, dancing, and shouting for joy in and out of the stadium.

Saudi leader Mohammed bin Salman Al Saud also announced that the victory deserved a public holiday for “all state employees and the private sector, and male and female students in all educational stages”.

Meanwhile, Messi encouraged his football fans not to lose hope. He said in a post-match statement of Argentina’s next match against Mexico on Saturday 26 November: “We have to prepare for what is to come. We have to win come what may and keep things in our hands”.

He added to his fans: “It is a defeat that hurts, but we have to keep trusting in ourselves. My message to the supporters is to have faith. We won’t let them down.”

ARGENTINA IS TRASHED BY TWEEPS – AND NANDO’S

But despite Mess’s consolation or the prospect that Argentina could bounce back in their next match, both still became the target of cruel attacks and memes on social media

The Twitter account for Nando’s also chimed in. Taking a swipe at Argentina, it posted: “Things are getting Mess-i on the field”. And relating the football faux pax to their chicken eatery, they added: “No foul play over her”

Here’s what other tweeps had to say…