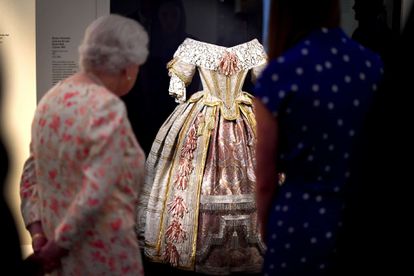 Britain’s Queen Elizabeth II looks at Queen Victoria’s costume for the Stuart Ball in 1851, part of an exhibition to mark the 200th anniversary of the birth of Queen Victoria, for the Summer Opening of Buckingham Palace in London on 17 July 2019. Photo: AFP/POOL: Victoria Jones

Britain’s Queen Elizabeth II looks at Queen Victoria’s costume for the Stuart Ball in 1851, part of an exhibition to mark the 200th anniversary of the birth of Queen Victoria, for the Summer Opening of Buckingham Palace in London on 17 July 2019. Photo: AFP/POOL: Victoria Jones

Each year in the summer months, the doors of Buckingham Palace are opened to visitors and Queen Elizabeth puts on a special exhibition is put on in the State Rooms. The focus this year is on Queen Victoria.

It explores how the ‘Feminist Queen’ transformed Buckingham Palace into the busy Royal residence it is today.

Queen Elizabeth went to preview her great-great-grandmother’s exhibition. Her son, Prince Andrew, the Duke of York, accompanied her to celebrate the 200th anniversary since Queen Victoria’s birth in 1819.

Some of the items on display include personal artifacts and mementos that Queen Victoria had made in relation to her children; such as an casket filled with baby teeth.

Queen Victoria also made casts of her children’s arms and legs, and these unusual items are also on display.

No, we don’t ask questions, we just look straight ahead and nod our heads solemnly.

Other casts on display include Prince Albert Edward’s arm and hand, and the left foot of Victoria, Princess Royal.

Queen Victoria had nine children but wasn’t fond of being pregnant, it is said.

Her collection consists of 14 marble hands and feet, which she kept under glass domes. To preserve their pristine whiteness, you see. Dr Amanda Foreman, curator of the exhibition, explains:

“What these objects show is what her words couldn’t express which is this deep, fierce passionate love for her children; and for the recognition that childhood is so important – the thing that she felt she never had.”

In addition, Foreman adds that she transformed Buckingham Palace and created new traditions; “traditions which we now associate with the modern monarchy.”

As for referring to Victoria as the “Feminist Queen,” Foreman furthermore explains:

“We tend to diminish the contribution of women in particular. We assign their success to the men around them. And we tend to simply forget who was responsible for certain things. So by putting on this exhibition, we are stripping away those lawyers of oblivion, forgetfulness, discounting; and allowing Queen Victoria the space to shine.”