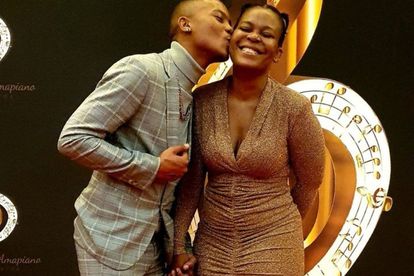 Zodwa Wabantu has impressed her Instagram followers after she admitted that her recent red carpet hairstyle cost her only R50!

The exotic dancer and entertainer made an appearance at the Amapiano Music Awards over the weekend where she showcased her budget beauty style.

“Simple, but you still look amazing”; “Natural beauty” and “That R50 hair suits you” were some of the comments under the posts.

Zodwa – who is opening a hair salon in Esikhawini next month – even received compliments for wearing a classy dress.

“You look beautiful with clothes on,” said another follower.

Meanwhile Zodwa and her bae Olefile Mpudi aka Ricardo have made their first official public appearance as a couple.

The businesswoman took her “Ben 10” boyfriend as her date at the Amapiano Music Awards and showed off their best “his and hers” style on the red carpet.

The couple posted the same picture on their Instagram accounts alongside matching captions.

“Come grow old with me. The best is yet to be”, Zodwa and Ricardo captioned the loved-up pic of them.

On Friday, Zodwa defended Ricardo against rumours he is after her money, claiming she looks after him financially anyway.

She said in an Instagram video: “I love my Ben 10. Guys, imagine not falling in love because you are scared that it’s going to end? Mina, I’m going to love hard even if it ends. I’m going to continue to give my partner money…”

Zodwa shadily captioned the post: “Don’t compare this relationship from the stealing one”, referencing her ex Vusi Buthelezi.