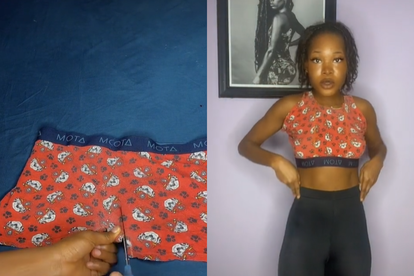 This ama2000 transformed these boxer briefs into a crop top. Images via TikTok @queenofhacks

This ama2000 transformed these boxer briefs into a crop top. Images via TikTok @queenofhacks

Here in South Africa, the Ama2000s are slowly recreating fashion and many other things – especially on social media. A few weeks ago, one went viral after showing up in jeans that were so ripped it looked more like a weird bikini bottom. And now another young lady has shared some fashion advice and to be honest, many people are unsure about it.

The hack, as she calls it, involves turning a pair of men’s boxers into a crop top.

Young woman transforms boxers into a crop top: Would you rock or pass?

People are becoming increasingly creative and liberal when it comes to fashion but where do we draw the line?

One young TikToker with the handle @thequeenofhacks took to the app to share how she managed to transform a pair of used boxers – yes, you read right – into a crop top.

In a clip that has been viewed thousands of times, she demonstrates how a person can turn the used underwear into a funky top for ladies and gentlemen who love showing off their bellies.

The young lady can be seen putting the printed underwear on display before proceeding to cut out the crotch part to create a neck hole.

She then slips it on with ease and shows off the final product.

“Booty shorts to crop top,” the self-proclaimed “Queen of Hacks” captioned the post.

What do netizens think:

Many TikTok users said that they would never try the hack and asked the woman to rather throw away the used underwear.

“if only you knew how this look on you, you couldn’t have posted it