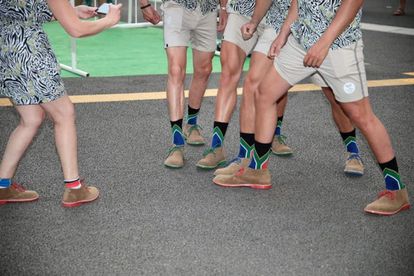 In what has been described as a “full circle moment”, Veldskoen shoes made its debut as South Africa’s official off-field shoe at the 2020 Tokyo Olympics.

As the opening ceremony of the Olympics kicked off on 23 July, South African athletes were spotted wearing the shoe, that was once described as a favourite among Prince Harry and Ashton Kutcher. These shoes are based on the design of veldskoen, or colloquially known as ‘vellies’, which are known for their comfort and durability.

Veldskoen has gone from strength to strength since the small South African start-up was founded in 2018. The shoes are versatile and complement almost any outfit, casual or otherwise, but they are also extremely popular amongst people on safari as they are durable and hardy as well.

Veldskoen took to social media to share the update, saying: “What a moment!!! In the Olympic Village right now!!”.

When the announcement was made at the 100-day countdown press conference at the Olympic House in Johannesburg, CEO and Founder of Veldskoen Shoes, Nick Dreyer said, “We want people to show their support for our teams regardless of whether they’re watching from the stadium or from home”.

Veldskoen MD Ross Zondagh also added, “It is very surreal for me. Veldskoen started as a moment of curiosity, a little dream. And now, our little dream will be walking out of that stadium tunnel to the opening ceremony. The whole world will see them.”

According to SAPoeple, Veldskoen Shoes was started because of a conversation between Dreyer and Zondagh about the controversial outfits that were worn by the South African team at the 2016 Summer Olympics in Rio.

“Unimpressed with the kit the SA athletes wore to the opening ceremony, our founders began imagining what they could have worn that would have better represented South Africa. The answer they came up with was a pair of traditional Vellies but injected with a pop of colour. Our signature look today. Well, the story has come full circle. Veldskoen has been chosen as the official off-field shoe for South African athletes at this year’s Olympic Games in Tokyo. We’ve been pinching ourselves all day. What a dream come true!”

“At last the SAfrican team has some funky clothes and shoes on! Not like the last times, when they were wearing ill-fitting and hideous clothing on! Well done to the organisers of the team for bringing our athletes out in style!”