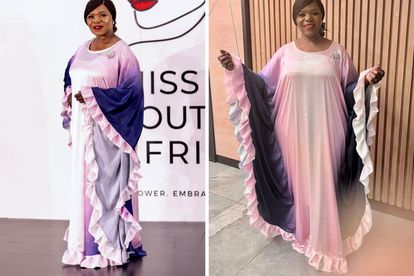 Thuli Madonsela has been mocked over a dress she wore to the Miss SA judging day this week.
Image via Instagram
@thulimadonsela3

Thuli Madonsela has been mocked over a dress she wore to the Miss SA judging day this week.
Image via Instagram
@thulimadonsela3

Thuli Madonsela’s attempt to be the best-dressed in the room at the recent Miss SA judging day fell flat on its face.

The former public prosecutor is an official judge at the pageant, which takes place on Saturday 13 August.

At the recent judging day, the power panel was called on to do one-on-one interviews with the Top 10.

And given the fact that it was a beauty pageant, the committee were expected to put their best fashion foot forward.

But Thuli quickly learned that her unusual outfit was not going to land on the best-dressed list. She tweeted: “A few ‘not so kind people’ have said my dress looks like a bedspread or curtain. Do you agree?”

She added: “The material is used for the Rwandan traditional dresses”

TWEEPS GIVE THEIR UNFILTERED OPINIONS

But whilst Thuli Madonsela posted picture on Twitter, tweeps were dragging her through the mud over her dress.

Here’s what they had to say about her fashion look:

@JohnsonAwalle: “Not Thuli Madonsela looking like she is doing a baptism scene in one of Rebecca Malope’s gospel music videos”

@RealMbombo: “That eiderdown is definitely from Homechoice”

@UnaMbo1: “It looks like those toilet covers my grandma used to have in the olden days”

@Coomor: “What in the bedspread couture is going on here? Its giving night-frill vibes”

Defs giving Homechoice vibes. Resemblance is all there. Those ppl were not being unkind, the truth is always a hard pill to swallow beyps pic.twitter.com/603s2VgmZ7

Your taste in fashion is questionable pic.twitter.com/2UuTef6Uo5

It’s not you Mama ♥️
It’s the dress