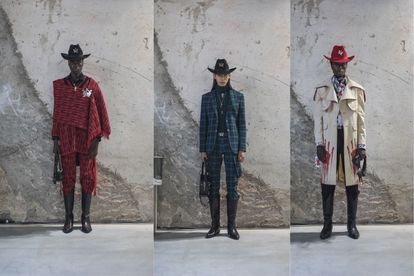 His Double Think collection was inspired by Mandy Wiener’s book The Whistleblowers.

ALSO READ: ‘The Whistleblowers’: Legislation has failed them – Mandy Wiener

‘DOUBLE THINK’: THE INTENTION BEHIND THE COLLECTION

Magugu’s Double Think explores the ongoing corruption in South Africa. The show’s visuals depict a police station’s waiting room with the models being the whistleblowers of the corruption scandals in Wiener’s book.

To recreate the waiting room, the models were seated back-to-back with one of them standing up randomly to walk around the other seated models.

Not your ordinary runway show

“Education suffers, so many things suffer because of greedy actions of these powerful people,” Magugu told Vogue.

Magugu’s theme resonates with the current political and civil unrest and the collection was shown around the time of former president Jacob Zuma’s arrest. This politically charged collection featured illustrations from acclaimed political cartoonist Jonathan Zapiro.

“And a lot of the politicians that are mentioned in the book often escaped being interrogated, so I thought it was very interesting to place these words in that setting so people could imagine what that might look like,” sais Magugu.

Along with the powerful political message, the garments on the show also represented the facade of male power and authority. Cowboy hats and boots feature across the board of this collection, along with suits, Stetsons and coats.

Overall a sartorially well put together collection, with stunning tones.

Mandy Wiener’s book, The Whistleblowers, inspired Magugu’s showing and the book speaks about how whistleblowers are seen in a negative light.

Whether they’re described as traitors or snitches, whistleblowers risk their lives and careers when they expose wrongdoing in political spaces. Their outcomes are shocking in most cases, from murder to intimidation tactics and being blacklisted.

The book aims to shine a light on the long-lasting effects of being a whistleblower and if they’re also complicit in the cases they speak up about.

The harrowing personal accounts of the whistleblowers reveal the dark-sided nature of South African politics and it was well communicated in Magugu’s show.

Magugu’s effort reminds us of how powerful art can be as a medium of communicating current affairs and being bold enough to share uncomfortable truths about political issues.