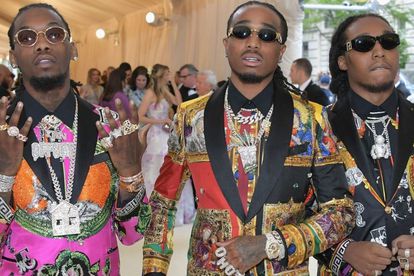 Migos in colourful Versace ‘drip’ at the Met Gala in 2018. Image via Twitter @Cosmopolitan

Migos in colourful Versace ‘drip’ at the Met Gala in 2018. Image via Twitter @Cosmopolitan

The hip-hop fraternity and fans are still mourning the tragic death of Takeoff. The Migos rapper, real name Kirshnik Khari Ball, was shot and killed during an altercation over a game of dice at a Houston bowling alley on 1 November.

On Thursday 1 December, exactly a month later, Houston police has arrested and charged a suspect — Patrick Xavier Clark, 33 — with Takeoff’s murder, according to CNN.

The late rapper is still very much in our midst: From a posthumous appearance on the New Metro Boomin album to pioneering icy hip-hop fashion as Migos.

New Metro Boomin’s Heroes & Villains was released on 1 December and features a lineup of rap and R&B guests, including The Weeknd, Travis Scott, Gunna, Young Thug, John Legend and Future. Takeoff is also featured on Feel the Fiyaaaah with A$AP Rocky on the LP.

Takeoff and his cousin Offset rose to fame alongside Quavo in the rap group Migos. After releasing their first mixtape in 2011, the trio ultimately received two Grammy nominations and debuted their fourth album, Culture III, in June 2021.

Takeoff and Quavo formed Unc and Phew without Offset, who embarked on a solo career after the group separated earlier this year.

The talented trio pioneered a style of rapping in choppy, staccato triplets known as the “Migos flow”, according to BBC.

No-one can argue the fact that Migos were also style pioneers. The group introduced high fashion to hip-hop, giving birth to “drip” and making brands like Versace hot in the black community.

They have influenced fans to be unapologetic with their style.

In 2018, the Migos men strutted the Met Gala red carpet in funky Versace blazers with plenty of chains and fingers dusted with bling. True to themselves, the trio were always unapologetic with their style.

As a tribute to Takeoff, let’s take a look at the former Houston trio fashion statements.

In 2013, Migos released the hit song Versace with their signature sound. Drake co-signed the group with a verse on the remix that sent the song to the Billboard charts.

According to Hello Beautiful, the tune — which featured their iconic adlibs and melodic rap — also popularised the Versace fashion brand in hip-hop. Although Migos and Donatella Versace never collaborated on any partnership, the designer used the song during a runway show in 2013.

While discussing Migos’ fashion influence, Quavo and Takeoff spoke about the Versace trend that they set in motion.

“We real trendsetters. They started wearing Versace, they started doing the flow – now everybody dabbing,” Quavo said in a 2016 interview with VladTV

ALSO READ: ‘It has been a nightmare’: Cardi B pays tribute to Takeoff

In 2017, the trio walked the Met Gala red carpet in their signature sunglasses and all-black tailored Versace suits. The perfect palette to showcase their dripping bling.

To Migos, their jewellery stood as a symbol of success. In their YouTube docuseries Ice Cold, the trio explores hip-hop’s obsession with expensive jewellery.

“It talks about the American Dream,” Quavo explained to HypeBeast when discussing the project.

“Especially coming from inner cities, projects, nothing. When you’re looking up to the wrong influences. Kind of, like, showing where we came from and showing that it’s hard. But you put jewels on to talk about the trophies and it makes you feel like somebody,” said Quavo.