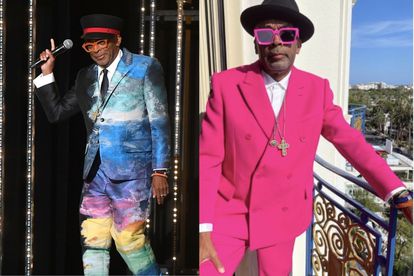 Award-winning directed wowed at the Cannes Film Festival in his colourful and funky attire on the red carpet. Images via Instagram @officialspikelee and Twitter @LouisVuitton: Supplied

Award-winning directed wowed at the Cannes Film Festival in his colourful and funky attire on the red carpet. Images via Instagram @officialspikelee and Twitter @LouisVuitton: Supplied

The slick and flamboyant Spike Lee didn’t disappoint fashion lovers at the 74 Cannes International Film Festival. The two eye-catching suits from the opening and closing nights are as colourful and unapologetic as Spike has been his entire career, in both fashion and film.

ALSO READ: Female touch: Where are the women at Cannes Film Festival?

The 64-year-old filmmaker headed the Cannes Film Festival jury this year alongside actresses Maggie Gyllenhaal, Jessica Chastain, Mati Diop and French actor, Tahar Rahim. It has been 32 years since Do the Right Thing premiered at Cannes, making it Lee’s full circle moment at the festival this year and he stood out in his colourful and experimental ensembles.

In typical Spike Lee fashion, his outfit was a blend of sophistication, personal edge and rebelliously cool.

On the opening night, he stepped on the red carpet with a hot pink Louis Vuitton suit and matching shades from the same luxury french brand put together by Virgil Abloh. The well-tailored double-breasted suit was topped off with a fedora hat and a custom pair of Nike Air Jordans, which came in French colours of blue, red and white.

CLOSING THE FILM FESTIVAL IN ANOTHER CUSTOM SUIT

Lee caused quite the stir on the closing night for not only his choice of outfit but for a blunder that almost overshadows a memorable week for the filmmaker. He accidentally revealed the Palme d’Or winner – the biggest award of the festival, at the beginning right at the beginning of the final evening’s proceedings.

The award went to Julia Ducournau’s fantasy drama flick, Titane. Despite the awkward mistake, Lee was the standout on the red carpet once again when he donned a custom Louis Vuitton suit.

The trippy-looking two-piece was splashed with a brush-stroke paint design. The multi-coloured ensemble had touches of blue, purple, pink, yellow and a bit of green. He finished the look off with his signature orange-framed spectacles, a tie and the french-coloured custom Jordans designed by Tinker Hatfield.