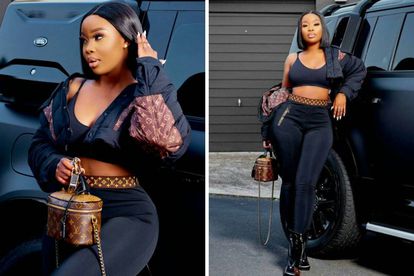 Sithelo Shozi – the baby mama of Andile Mpisane – never does things in half measures, and has the receipts to prove it!

Fresh off her return from having a “mommy makeover” in Turkey, the Durban DJ recently purchased a luxury Land Rover that the Twitter timeline in a tizz.

But petty tweeps accused the mom-of-three of wearing a fake Louis Vuitton outfit in a clip she posted on social media.

In the clip, Sithelo visits a dealership where she is seen driving off in her R2.5 million Defender V8.

And fitting with her luxury new ride, the influencer was seen wearing high-end label Louis Vuitton from head-to-toe.

But tweeps accused the entertainer of “faking” it with her designer look – a move the DJ has clapped back on.

Taking to her Instagram Stories, Sithelo shared receipts of her Louis Vuitton look worth almost R200 000. Here’s how much it cost…

CLAPPING BACK AT MPISANE ‘HUSH MONEY’

Meanwhile Sithelo – who will face off against Andile Mpisane in court over her allegations that he abused her throughout their relationship – has rubbished claims his family “bought” her silence.

Taking to her IG Stories, Sithelo responded to a fan who questioned if MaMkhize had funded her luxury lifestyle.

“Let’s get this one out of the way. I’m not the one to clear any rumors but let it be known where I stand, once and for all I remain in my truth. I am very appreciative of everyone who has shown me genuine support and aided in the success of all the signatories of the petition I put out. Due to the nature of this matter, I’ve protected myself and with my truth with my silence letting my attorneys deal with it as best as possible.

Sithelo then gives an update on their legal matter surrounding the domestic abuse allegations.

She continued: “As stated previously, the date of the order is the 31st of October and I stand firm in all I’ve said. Nothing has changed, gender-based violence is a serious matter in this country and nobody/no bribes could have erased the damage caused by the perpetrator. To answer the question, No”.