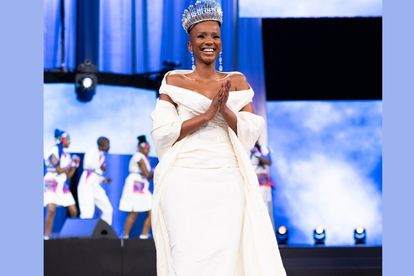 Former Miss South Africa Shudufhadzo Musida passed down her crown to her successor, Lalela Mswane on Saturday 16 October at the Grand Arena, GrandWest in Cape Town.

Shudufhadzo Musida took her final walk across the stage as Miss South Africa on Saturday 16 October at the GrandWest in Cape Town. She thereafter passed down her crown to 24-year-old Lalela Mswane who is now the reigning Miss South Africa.

Shudufhadzo, affectionately known as Shudu, said her advice to the new Miss South Africa is to be authentic and work hard to create her own seat at the table.

“The platform amplifies your voice so while you have the platform, the work that you do is absolutely amazing and will be amplified for the world to see. So while you’re there, be authentic — but also work really hard and create your own seat at the table,” said Shudu to Times Live.

“I was in disbelief, but as the months went by I knew why I had to be Miss SA during this time. I knew I had to speak about mental health. I became more confident in what I was doing and why, and what my purpose was. So now, as I hand over the crown, I know that I’ve fulfilled my purpose and there’s no better feeling than that,” said Shudu to the publication.

She went on to say that she along with team Miss South Africa has done what was necessary to empower the minds of people.

“My mandate, when I became Miss SA, was mental health. We need to empower the minds of people so they can better themselves and be empowered enough to face the situation we are facing right now. I think we [team Miss SA] did the necessary work that was needed to to empower people,” she continued.

During her reign, Shudu completed her honours in international relations at Wits University. Although the misunderstanding surrounding her graduation came under fire.

She also wrote a children’s book about her experiences of being bullied as a child. The book is titled Shudu Finds Her Magic.

The former Miss South Africa titleholder wore a Gert-Johan Coetzee gown for her final walk at the finale. She explained that the dress is a true representation of her reign and who is as a person — as it is the beginning of something great.