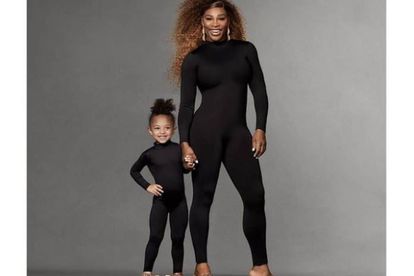 In a video clip promoting the campaign, Serena said: “I would definitely call Olympia my mini-me. She is mini Serena.”

Olympia also slipped her feet into some leopard print heels just like her parent’s in one of the shots.

Mom-and-daughter range inspired by THAT catsuit

The range was inspired by the court catsuit Serena first wore at the 2018 French Open, shortly after giving birth to Olympia. Elsewhere, Serena – who has Olympia with husband Alexis Ohanian – admitted she is undecided if she’d like her little girl to follow her into a career in tennis.

She added: “I don’t know if I hope if Olympia follows in my footsteps. I want her to do whatever she wants to do and what’s best for her.”

However, Serena previously said she is adamant Olympia will have a career in fashion as she is already judging her fashion looks.

She said: “She dresses me and her father. She’ll set up before bed what we need to wear in the morning. And she says, ‘Blue shirt, blue shirt, blue shirt.’ And then she goes, ‘Mama wear this or these shoes.’ She always tells me to wear heels. She’s currently wearing heels.”

She added: “I do wonder what that’s going to be like when she’s a little bit older. I have no idea. We’ll see. I can’t wait. So far, she’s been wearing my heels, so I’m like, ‘She’s going to be in fashion!’ I could’ve sworn today, she looked at me, and she was like, ‘Gee, yeah.’ I was like, ‘You like what mommy’s wearing today?’ When I come out sometimes, she’s like, ‘Oohh! Ma!'”