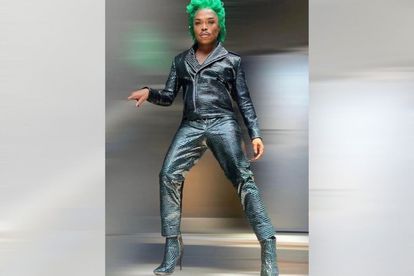 Somizi and Riky Rick were not only close friends, but shared a common love for fabulous fashion.

And that’s exactly how the Idols SA judge is choosing to remember the late rapper, who sadly died on Wednesday, 23 February.

The media personality showcased a look that was both bold and bittersweet.

Somizi has shown off an array of showstopper looks on the Idols SA set. But none of them come close to his special style ode to Riky Rick

The star wore a gun-metal studded suit with matching boots. In true Somizi-style, he also rocked a bright green wig which was laid to perfection.

On the back of his jacket was an ode to Riky Rick: “87-22” was emblazoned in a bright orange hue, representing the year in which he was born and the year he died

Above the dates was his name “Riky”.

‘HUGGING YOU FOR THE LAST TIME’

By the looks of it, the encounter seemed to take place at a party. In the video the pair embrace and engage in deep conversation

Somizi captioned the clip: “I am not ok….If i was asked what’s the one thing i’ll remember u by…I’d undoubtedly say the way you got excited to see me whenever we bumped into each other ….

“On this day you asked me if I am ok after everything I’ve been through.

“Then you said: ‘Somizi please let me know if you need to talk or need anything’. I promised I would. Little did I know I was hugging you for the last time.”