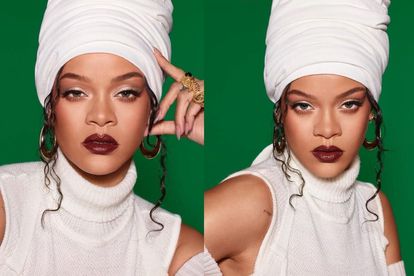 Grammy award-winning singer and businesswoman Rihanna launched her cosmetics brand Fenty Beauty in September 2017. Almost five years later, Rihanna announced that Fenty Beauty will be available in a few African countries including South Africa, and what better way to launch it than by wearing a South African designer’s pieces? The Work hitmaker made her announcement while wearing a Thebe Magugu Merino Wool Fringe Knitted Dress.

Taking to Twitter on Tuesday 10 May, Rihanna announced that Fenty Beauty will soon be available in South Africa, Botswana, Ghana, Kenya, Namibia, Nigeria, Zambia and Zimbabwe.

The 34-year-old billionaire added that Fenty Beauty will be available on 27 May.

The award-winning designer shared that she wore his Merino Woll Fringe Knitted Dress with a detachable bralette from his Autumn/Winter Alchemy 21 collection that explores the “changing face of African Spirituality”.

Magugu unveiled the collection during Paris Fashion Week in March 2021. Speaking to British Vogue, the talented designer said the collection was “quite a niche phenomenon.”

“African spirituality I can imagine sounds extremely general when heard by a foreign audience, but it is such a critical part of the local black experience and I am no exception.”

WHICH OTHER CELEBS HAVE WORN THEBE MAGUGU?

Singer Miley Cyrus showed off her Thebe Magugu men’s suit while flying high in a private yet while Kylie Jenner flaunted her wool suit.