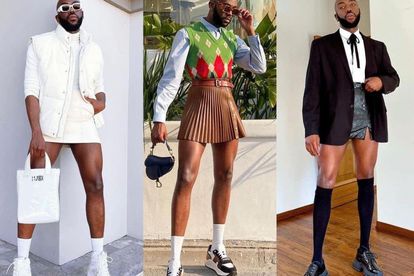 The Twitter streets are divided after award-winning fashion designer Rich Mnisi shared a picture of himself in a brown pleated mini skirt on Instagram on 21 June.

RICH MNISI IN THOSE MINI SKIRTS…

Rich Mnisi is known for their exorbitantly priced clothing that celebrities and influencers such as Somizi and Sarah Langa are known to show off. The designer behind the fashion brand seeks to push fashion boundaries. He seems to be moving into the gender-neutral side of fashion after recently posting a few pictures of himself rocking mini skirts.

The fashion designer remained lowkey on social media for a while and has now returned with a bang.

In the latest picture he is seen in a brown pleated miniskirt paired with a white long sleeve shirt, a Gucci pullover, a Christian Dior saddlebag, white socks, sneakers and sunglasses.

In another picture he is seen rocking a miniskirt in an all white look featuring a turtle neck, sleeveless puffer jacket and sneakers.

He also went school-boy themed with what seems to be a black leather skirt, white skirt and a black blazer.

TWEEPS WEIGH IN ON RICH MNISI

While many admired his fashion sense, non-binary outlook and praised his “stunning” legs, others seemed to think skirts aren’t for men.

Other Tweeps were strongly against men wearing skirts and expressed their brutally honest opinions as always.

While others thought these opinions were based on toxic masculinity and homophobia. Some Tweeps brought in traditional attired into the mix.

This is not the first time Rich Mnisi had people talking, in February his R60 000 xibelani skirt from his Hiya Kaya ’21 collection sold out with Somizi buying one and influencer Sarah Langa modelling the skirt.

He also trended on social media after releasing a face mask for R2000. It is clear that the high-end fashion designer has a target market.