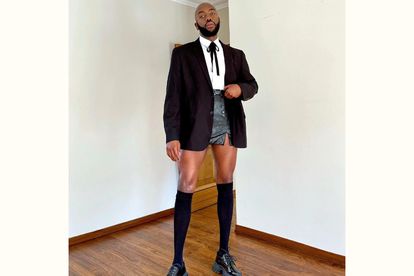 South African fashion designer Rich Mnisi has ventured into furniture design with the exhibition of his collection Nyoka on show at the Southern Guild Art Gallery, in Cape Town, until 4 February 2022.

FROM SHORT SKIRTS TO SOFAS

Rich Mnisi, who is known for his exorbitantly priced clothing, had tongues wagging in June when he posted pictures of himself in super short skirts for men. His move into gender-neutral fashion however did not sit well with everybody.

His supporters though loved seeing him rock those super short skirts which he took to the streets of Milan for the fashion week in September.

The high-end brand designer has now ventured into furniture design with his collection Nyoka. The furniture collection includes rugs, chandeliers and more that play around with fluidity using bronze, wool, glass and more.

Rich Mnisi was inspired by his family history and African mythology and plays with the duality of fear and beauty. “Nyoka” means “snake” in Xitsonga.

“To live is to embrace this duality. To accept that joy and tragedy, light and darkness, dreams and nightmares are connected, orbiting and defining each other,” said Rich Mnisi.

The exhibition opened on 2 October at Southern Guild, an art gallery in Cape Town until 4 February 2022.

NYOKA STARTED WITH A NIGHTMARE

In an Instagram post by Southern Guild, Rich Mnisi explained the idea of channeling a snake into the collection started with a nightmare his mom had.

“This started with a nightmare. My mother dreamt of a snake on her back. When she turned to look at it, she saw an intense green creature, frightening and fluid, dangerous and beautiful,” he said.

He explained that this is where his journey began which led him to the “god of vomit”.

“My journey started here, and led me to Congo’s Bushongo mythology and its creator god, Bumba, the god of vomit. He vomited up the sun, Earth, moon and stars, and then the rest of the natural world from that acidic pain and discomfort,” he continued.

“Unlike most of our world’s origin stories, this one proposes that the beauty and life of our world could be purged instead of birthed,” he added.