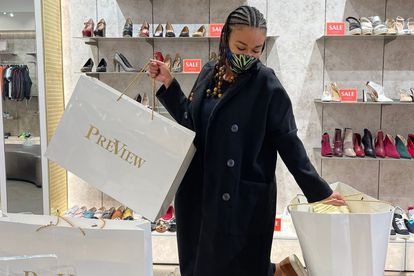 Pearl Thusi may be among Mzansi’s most elite stars, but she still loves a good bargain, so much so, that she attempted a stint of online shopping, which horribly backfired.

PEARL THUSI: ‘I SENT EVERYTHING BACK‘

The actress revealed that she once ordered clothes from a Chinese women’s online retail store Shein, only to be sorely disappointed with what she received.

She tweeted; “I once bought things from Shein when I lived in NYC. I sent everything back. I hope the quality has improved because no ways”.

“Isn’t this Shein where Anele bought her boots?”, another tweep hilariously asked, alluding to a pair of shoes Anele Mdoda had custom made.

And speaking of shopping, Pearl revealed where she buys her clothes from.

She told a tweep; “Mostly at Preview because the service is dope – mainly luxury items. And boutique stores or off stylists on shoots.

The Queen Sono star also stressed that she supported local designers too.

“I’ve bought from Parooz, Rich Mnisi, Thula Sindi, David Tlale and Avant. [And] many other stores,” she said.

And Pearl is not letting her one shopping disaster deter her from buying online. “Works out cheaper,” she added.

PEARL THUSI ON A MISSION TO GIVE BACK

Meanwhile, Pearl Thusi revealed that her latest mission was to work on a project that involved giving back to charity. The actress aimed to do this by working alongside some of the biggest stars and influencers in the business.

She tweeted; “I’m putting together items to sell and/or giveaway for charity… calling on other influencers and celebs/influencers/ companies to donate so we can give back… just wanna make a difference”.

We can’t wait to see what she has in store!