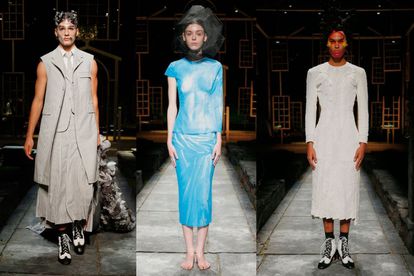 With notable appearances from designers such as Thom Browne and Altuzarra and eye-catching, iconic sets, New York’s Spring/Summer 2022 Fashion Week made a triumphant return to in-person shows after an almost 18-month pause due to Covid-19.

Here are some highlights.

After two primarily virtual editions of the fashion extravaganza due to the coronavirus pandemic, designers took advantage of the wealth of backdrops that the Big Apple has to offer.

LaQuan Smith, a rising star among new Black designers, set his show against the opulence of the Empire State Building, blending glamour and sensuality with short dresses and bare shoulders.

With Fashion Week finally returning to something like normal, many designers opted for nature themes. Collina Strada, which bills itself as more sustainable fashion and uses many recycled materials, hosted a joyfully chaotic show in an urban vegetable garden.

On Sunday, the Tory Burch show took place in a mock farmer’s market, recreated in front of one of the designer’s shops in New York’s chic Soho neighbourhood.

Strutting between fruit stands and bookstore tables, models showed off her latest collection, a tribute to American designer Claire McCardell that celebrates an elegant and determined woman.

For several years, Thom Browne has preferred to show his fashion in Paris. But this time, he wanted to make a detour to New York.

He explained it was his way of supporting the exhibition on American fashion – In America: A Lexicon of Fashion – that opens on Saturday at the Costume Institute of the Metropolitan Museum of Art. The exhibit’s curator, Andrew Bolton, is also Browne’s partner.

On Saturday during his show, Browne told a musical tale, where each model doubled as a character in the story.

Set in an eerie, enchanted garden with a soundtrack from a music box, the program’s dominant colour was grey, in layered coats, jackets, skirts and pants. But the sober scheme was offset by whimsical flowers pinned in the models’ hair and painted on their faces.

THE RETURN OF ALTUZARRA

Also a regular on the catwalks of Paris, his home city, Joseph Altuzarra returned to New York to display his spring/summer collection. His Sunday show, opened by supermodel Gigi Hadid, was abloom with flower ornaments and lace necklaces.

“There is a kind of freedom and openness about New York and the New York fashion community that doesn’t exist in other places.”

THE SHOW GOES ON… AT THE MUSEUM

Tom Ford’s show closed out Fashion Week Sunday night, serving as the grand finale to a series of 90 other presentations throughout the expo. But New York’s museums have kept the show going.

An exhibit tracing the history of legendary French designer Christian Dior has just opened at the Brooklyn Museum, and on Saturday, the Met will begin the first chapter of its retrospective on American fashion.

The glittery Met Gala, a star-studded event that raises money for the museum’s Costume Institute, was set for Monday evening, after being postponed in May due to Covid-19.

Traditionally, the gala’s dress code is themed according to the Costume Institute’s upcoming exhibition. This year it has a distinctively youthful imprint, hosted by singer Billie Eilish, actor Timothee Chalamet, poet Amanda Gorman and tennis star Naomi Osaka, none of them older than 25.