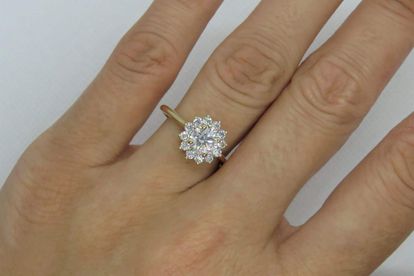 Moissanites are anything but “fake diamonds”. The first natural moissanites were discovered in the early 1890s by scientist Henri Moissan in a meteor crater in the US.

In its natural form, moissanite, a true gemstone composed of silicone carbide, does not appear in large enough quantities to be mined, and so it took years to perfect the gem’s composition in laboratories.

The difference between moissanites and diamonds

Diamonds are popular because they are beautiful and shiny – and so are moissanites. Moissanites actually emit more of those beautiful “rainbow flashes” than diamonds do.

Its brilliance, the way light reflects from the interior of the gemstone, does not shy away from that of a diamond, and although it is a bit different, it is actually more brilliant than a diamond.

Durability is just as important. While diamonds are the hardest gemstone, measuring 10/10 on the Moh scale of hardness, moissanite is a close second at 9.25.

Moissanites are kinder to planet and people…

Another important factor to consider when shopping for some sparkle is the sourcing of the stone.

Moissanites are environmentally friendly in every way because of how they are created and sourced. Diamonds have controversy around their sourcing and environmental impact, as well as social and political factors at play in their sourcing.

Moissanites that compare in size with diamonds are also considerably lower in price.

Diamonds just not that rare any more

“If you buy a diamond today at normal retail price, it’s unlikely that you’ll be able to resell it for more than its retail price at the time of selling it.

She said this was because diamonds are not rare and scarce as is often assumed any more, considering how easily they are accessed.

“Rarity and scarcity are drivers of price.”

“Moissanites are popular for the same reasons as diamonds, for their beauty and durability, and the cost is much lower because it costs much less to produce it.”

She suggested that, as with any fine jewellery, you have the piece valued every two years and, most importantly, have it insured.

Advice if you’re sticking with diamonds

Van Wyk gave the following advice when buying diamonds: “If you want to purchase diamonds as an investment specifically, please do some research to see what the real appreciation is and not the perceived value.

“As a jeweller I’ve never seen someone with a diamond sell it at a profitable price, because jewellers and traders can buy them at trade rates which can be up to 50% lower than retail prices, which is what you’d be reselling it for.

“However, if you’re buying diamonds out of personal preference, then it’s best to buy from a reputable jeweller to make sure you know what you get. In that case, don’t think of your purchase as an investment that will appreciate over time.”