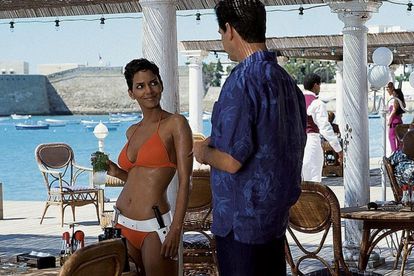 Halle Berry in ‘Die Another Day’. Image via Instagram @007.

Halle Berry in ‘Die Another Day’. Image via Instagram @007.

Shudufhadzo Musida, affectionately known as Shudu, is representing South Africa at the Miss World pageant this year. Although she passed down her Miss South Africa crown to Lalela Mswane on 16 October she is still representing Mzansi in Puerto Rico. This is because she was set to participate in the pageant last year but it was postponed due to COVID-19 and subsequently the lockdown.

This also means the Miss World 2019 Toni-Ann Singh is the longest reigning title holder in history. As we approach the finale of the pageant, here is a look at 10 contestants who appeared in James Bond films over the years.

Academy award-winning actress Halle Berry was the fifth runner up in the pageant 1986. She starred in Die Another Day. Halle played the role of Jinx – a femme-fatale NSA agent who falls in love with James Bond.

Denise Perrier was crowned Miss World in 1953 and she is the only French woman to hold the title. She played the role of Marie in Diamonds Are Forever.

Miss World 1958 first runner up Claudine Auger starred in Thunderball as Domino – an Italian beauty associated with the villain Largo.

Mary Stavin won the Miss World title in 1977 and played two distinct roles in two James Bond movies – Octopussy and A View to a Kill.

Carolyn Seaward was crowned Miss World second runner up in 1979. She starred in Octopussy.

Miss World second runner up in 1984 Lou-Anne Ronchi starred in A View to a Kill.