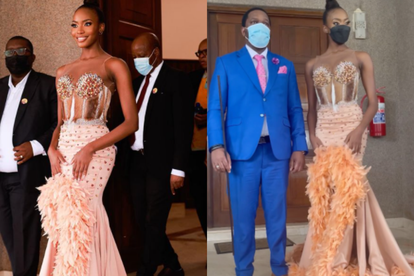 Miss South Africa 2021 Lalela Mswane has had quite a journey even though she was crowned not too long ago. Miss SA received a ton of criticism when she decided to go participate in the Miss Universe pageant which took place in Israel, late last year. The young beauty queen was also compared to previous Miss SA’s as many questioned how she won the title.

Not everything has gone wrong for young Lalela who recently met with King Misuzulu during her homecoming tour.

Lalela Mswane fought hard for the crown and eventually walked off the stage as South Africa’s newest beauty queen. The road after her victory was paved with adversities as she made the brave decision to participate in the Miss Universe pageant shortly after her crowning.

During her homecoming, Lalela met with King Misuzulu who gave the young Zulu girl a very warm welcome. The two met on Saturday 5 February this year and exchanged a laugh or two while the Zulu king took a closer look at her gleaming crown.

According to Briefly News, during their meeting, the King spoke highly of Lalela who is from a small KZN village called Sokhulu Village.

The publication also reports that the King referred to Lalela as an ambassador for Zulu people and if he could, he would take her on an overseas trip to show her off to the world.

Mzansi reacts to photos of the two of them

While some people simply shared compliments for our Miss SA, others thought that she and the king would make a great couple. Read some of their comments below:

“They need to hitch.”

“Beautiful, thank you Lalela our beauty queen for this moment.”