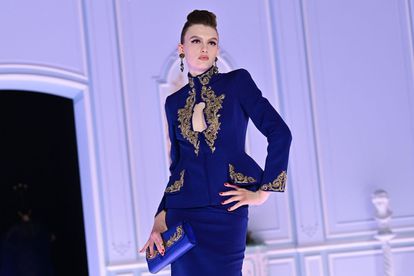 A model presents a creation during the Moschino catwalk show for the Fall/Winter 2022/2023 collection on the third day of the Milan Fashion Week on 24 February 2022. Image: Miguel Medina / AFP

A model presents a creation during the Moschino catwalk show for the Fall/Winter 2022/2023 collection on the third day of the Milan Fashion Week on 24 February 2022. Image: Miguel Medina / AFP

The fashion set put their best face forward on Thursday despite worries over the invasion of Ukraine, as Milan Fashion Week guests and workers vowed to go on with the shows.

The lineup, which included Emporio Armani, MM6 Maison Margiela, Prada and Moschino, appeared to go off with all the studied nonchalance expected at fashion events – but some admitted it was hard to focus, given the situation in the East.

One Ukrainian stylist and creative director, Anna Mazzhyk, said she was awoken by her parents at seven am, only to learn “Russia is attacking Ukraine right now,” she told AFP.

“I was crying before the first show because it’s difficult for me,” said the 22-year-old Kyiv native, outfitted in a puffy Prada vest and surrounded by her equally spruced-up friends.

“We’re all wearing sunglasses to cover up our puffy eyes,” she said.

Belgian model Louise Robert said that Ukrainian model bookers backstage at Prada were visibly upset, trying to figure out when and how they could go home.

“It was like a bomb – an emotional bomb,” Robert said.

FASHION CAN OPERATE AS A PARALLEL UNIVERSE

Still, makeup artist Chiara Tipaldi, 24, had acknowledged at Max Mara that although everyone was aware of the latest news, the fashion world operated as “a parallel universe”.

“It tries to be cut off from what goes on in the world,” Tipaldi said.

One French videographer inside the show, who gave his name as just “Etienne”, said perhaps that was for the best.

“I think most people are crushed,” he said. “But we can’t do politics inside here.”

Indeed, the runways offered up distractions galore for guests, including Kim Kardashian – thus far the fashion week’s biggest celebrity – in the front row at Prada, sheathed in avocado and black leather, to watch a newly redheaded sister Kendall on the catwalk.

Shoulders were oversized on black dresses that incorporated chains at an angle at the neck, while tweed overcoats offered a touch of whimsy with poofs of curly lambswool at the biceps in green, pink or blue.

Earlier, Max Mara’s Ian Griffiths showed a comforting collection whose brown and cream tones and rich textures brought reassuring sobriety to the mix – even as an eerily discordant musical soundtrack appeared to recall the news everyone was valiantly trying to forget.

Fuzzy teddy bear-style wool was seen on bomber jackets, overcoats, even pants and shorts, while an oversize quilted, double-faced puffer coat was just what the doctor ordered in these trying times.

It even looked as if it could double as a sleeping bag.

And for those who like fashion loud and in your face, Roberto Cavalli presented on Wednesday night a theatrical collection of what designer Fausto Puglisi called “cage dresses”, with bands of fabric barely covering strategic parts of the torso, together with the label’s signature over-the-top animal prints.

Cheetah bodysuits. Faux reptile capes. Leopard, leather, and fringe together – what’s not to love when the world is falling apart?

Lush mohair bodices in jewel tones of emerald combined with high leather collars, straps and metal rings – as if a naughty Elizabethan princess suddenly found herself in the dungeon.

Fashion show usher Alessandro Vailatti said he thought no one should be ashamed at feeling uplifted by the flights of fancy on display.

“It’s important that we distract ourselves.”