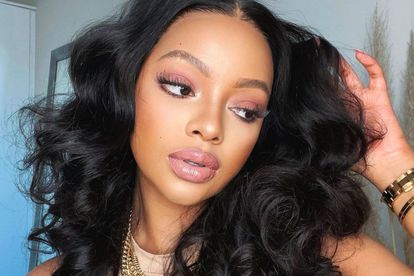 Tweeps are convinced influencer and blogger Mihlali Ndamase has gotten lip fillers following her latest TikTok video which was posted on Wednesday 25 August.

Influencer Mihlali Ndamase, who made the Forbes 30 under 30 list this year, posted a makeup transformation video to her TikTok account two days ago, where her lips appear to be plumpier than usual. This led to fans and followers questioning whether she got lip fillers.

The plumpy lip trend was popularised by Keeping Up With The Kardashians star Kylie Jenner a few years ago when she got her lips done. Kylie Jenner had her lips filled because she was insecure about her previously thin lips. The reality star revealed that she felt “unkissable” after a guy pointed out how small her lips were, at the Keeping Up With The Kardashians reunion episode.

“I had really small lips, and I didn’t ever think about it until I had one of my first kisses and a guy said to me, ‘Oh my God, you’re such a good kisser, but you have such small lips,’ or something like that. From then on, I felt unkissable,” said Kylie Jenner.

Before having her lips done, the make up mogul used to overline her lips to create the illusion of plumpy lips. Is Mihlali doing the same? Here is a picture of Mihlali before the lip filler speculation and after.

In the video, Mihlali did a glow-up transition as she lip sync’s a quote from rapper Nicki Minaj.

“Ya thought! 💁🏽‍♀️💜 #MakeupTransformation,” wrote Mihlali in the caption.

Mihlali’s fans and followers noticed that her lips looked different.

“Why is Mihlali not looking like Mihlali?” wrote Felicia Zungu.

“I love you so much babe but those fillers ain’t fo you,” wrote Itulmeleng.

TWEEPS WEIGH IN ON MIHLALI’S POUT

Following the video, Tweeps were also convinced Mihlali had something done to her lips, while one Tweep asked if it were lip fillers, a TikTok filter or an allergic reaction others thought she had lip fillers on her upper lip, only.