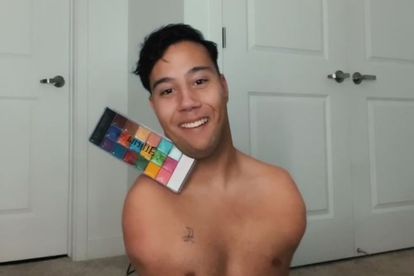 We’re all guilty of complaining about the things we don’t have….but for make-up artist Gabe Adams-Wheatley, what he doesn’t have is the very reason he is an inspiration to many around the world…

The beauty influencer — who was born with no limbs — has been making makes on TikTok with his amazing and talented tutorials.

Also read: Watch: Make your own make-up at home like SuzelleDIY

NO LIMBS, NO PROBLEM FOR MAKE-UP ARTIST

Gabe — who was born with Hanhart Syndrome — has gone viral after posting videos of himself effortlessly applying his own make-up…complete with contouring, blending and false eyelashes!

The Brazilian-born social media star carefully maneuvers the make-up brush between his chin and shoulder or balances it on a surface where he applies the various products with ease.

“He can put lashes on better than me,” one follower said in the comments section.

Another added: “Me with two hands and still can’t put on eyeshadow properly”.

But despite the seamless appearance, it’s been a learning curve for Gabe. He revealed in a Newsweek piece how he perfected his craft.

“At first, I would do my make up laying down. I thought it would be the best way for me to blend everything. I would lay a towel onto the ground, put a circular blending sponge down and pat my face down to get the foundation on.

“[Later] I would use a shower bench to help me apply my makeup, but it took a while to balance the brushes and the lighting was a bit dark so I’d come out and see my face in another light and think, what is this? Adam [my husband] then bought me a vanity table and cut the legs down, and bought me a ring light and now I use that every single day.”

Also read: Here is why – and how – you should be cleaning your make-up brushes

‘I CAN APPLY FALSE EYELASHES IN LESS THAN A SECOND’

Gabe — who grew up in an American Mormon family =- now boasts about his amazing achievements – and rightfully so!

He added to Newsweek: “One of my most popular videos has been the one where I show how I put on my false eyelashes. That video has gone viral on Twitter and TikTok. It was actually easy and now it takes me less than a second.

“I have the muscle memory of where they need to go, how they need to feel and what they need to look like, because I can’t look into a mirror when I’m doing it.”