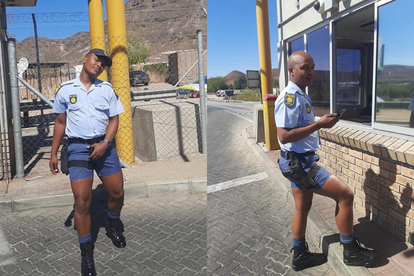 A South African police officer has caught the attention of thousands of South Africans after snaps of him posing candidly in his uniform were shared online. The officer in question is wearing some really short and tight shorts – and this is the real reason why many locals have not stopped talking about him.

A local law enforcement official has become an instant internet celebrity after a young woman headed to Twitter to share some snaps of him posing quite professionally in his work attire.

The real reason why he’s become an internet sensation is because of his shorts, which are both super short and super tight – something not many folks are accustomed to seeing police officers wearing.

According to those who have seen it before, these kinds of uniforms are usually worn by border posts/ports of entry police.

@Katlie_Moo who shared the series of snaps of the arguably stylish young officer jokingly captioned her Twitter post:

The post reached nearly 1000 likes and many comments from people who either complimented the cop and his cheeky shorts or blamed the shorts for the crime rate in South Africa. Read some of their interesting comments below:

“Officer u can come to arrest me any time”

“Hayi, this shorts thing has a touch of school uniform about it….but we not complaining.”

“You have a right to remain silent honey”

“This cop is more into modelling than chasing criminals”

“How is he going to chase criminals with these tight shorts”