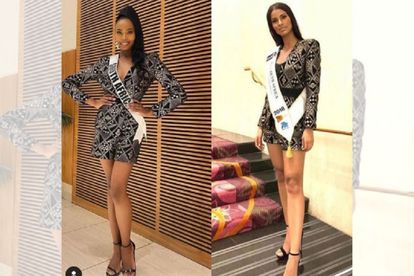 Lalela Mswane is putting her money where her mouth is when it comes to sustainable fashion. The Miss SA winner is currently in Israel ahead of the Miss Universe finale next week.

But instead of showing off a brand spanking new wardrobe, the pageant queen has revealed looks worn by past winners.

Lalela Mswane has been adding her own unique touch to looks previously worn by Zozi Tunzi, Tamaryn Green and Thato Mosehle.

And the LLB graduate is confident that she is doing her bit to cut down on fast fashion.

She wrote of her pledge: “We are so hungry for new, exciting and previously unseen items that we completely forget the implications of those choices and the effect it has on our planet. That is why I decided that half of my Miss Universe wardrobe will consist of outfits previously worn by my predecessors, the women who came before me and took our breaths away.

“I’ve decided to put my own spin on it and make sure that you still see me but I’m so grateful that I get to have a little piece of them with me, and all while making a small contribution towards a more sustainable future for fashion”.

WHERE IS THE NATIONAL COSTUME?

With just a few days to go before the Miss Universe pageant on Sunday, 12 December,  the country has yet to see Miss SA’s take on a traditionally local costume.

Previously, Miss SA winners would showcase their costume prior to leaving for international pageants.

This year has been a little different with controversy surrounding the Miss Universe pageant taking place in Israel marring Lalela Mswane’s reign.