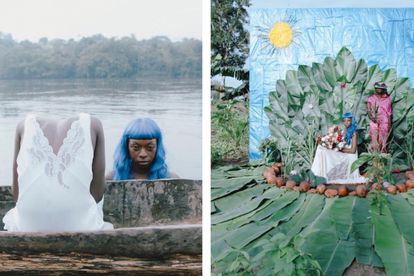 After South Africa’s Kristin-Lee Moolman gained international recognition for her powerful portraits against surreal, bleached-out landscapes, the international photographer spoke to CNN to speak about how she prefers to challenge the negative stereotypes about her home country.

Rebecca Cairns writes that Moolman won the Rudin Prize for Emerging Photographers in 2020, and has worked with big names, including Rihanna in a shoot for New York Times Style Magazine, and fashion houses including Dior and Burberry.

Moolman, who grew up during the final years of apartheid, said that the political turmoil in South Africa had a profound effect on her and her sense of identity.

After working on commercial fashion shoots, she reached the conclusion that she couldn’t create work that she didn’t identify with. Moolman now feels at home in South Africa and is speaking out against the prevalence of stories about poverty, violence, and lack of education in South Africa.

While she acknowledges these problems exist, she is frustrated that so much of her country’s “creativity and joy” is overlooked.

Women are powerful and respect for Rihanna

In recent years, Moolman says she is focused more on women and showcasing diversity. One of the trigger moments for this focus was Moolman’s 2019 shoot with Rihanna, for the superstar’s Fenty line.

“I have a tremendous amount of respect for Rihanna, because of her voice in terms of diversity, women, sexuality. I really like her ideology and her view on the world, so to be able to work with her was really cool,” Moolman said.

In celebration of Africa Day this 25 May 2021, The South African decided to look at some of Moolman’s projects – which according to CNN – are “infused with African spirituality”.