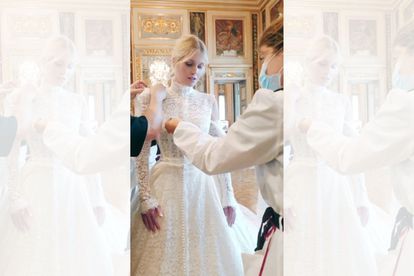 The couple said their vows at the beautiful Villa Aldobrandini in Rome in front of friends and family. The bride’s father is Earl Spencer, Princess Diana’s brother. Guests believed to have been in attendance include Pixie Lott, Idris Elba and Sabrina Dhowre Elba. Her cousins, Prince Harry and Prince William were not in attendance though.

The South African previously reported that the model agreed to become Lewis’ second wife last year even if he is 32 years her senior. Lewis, who has an estimated fortune of £80 million and three children, turned 62 in January and is five years older than Lady Kitty’s father, Earl Spencer. It is reported that Lewis’s late father, Stanley Lewis, controlled the South African clothing retailer Foschini and the Israeli travel company Paltours for several decades.

It is reported that Kitty wore a spectacular Dolce & Gabbana Alta Moda gown for the occasion. According to Harpers Bazaar, the Victorian-inspired gown was custom-made specially for the bride and was crafted from delicate white lace. It featured a high neck, long sleeves, peaked shoulders and a corseted bodice, and culminated in a full lace skirt with a train. Spencer paired the gown with a dramatic cathedral-length veil.

“Spencer, who has a long history of working with Dolce & Gabbana and is an ambassador for the brand, turned to the Italian designer duo for her entire bridal trousseau, with Stefano Gabbana and Domenico Dolce creating five more of her bridal looks during the weekend, too,” writes the publication.

Following the wedding ceremony, the bride changed into a double organza hand-painted silk gown embellished with flowers and crystals for the wedding dinner. She then changed a third time on her big day, swapping into a Dolce & Gabbana cocktail dress embroidered with silver and golden beads.

The 30-year-old model and aristocrat was in the Italian capital for several days prior to the wedding, sharing pictures from her trip on Instagram – with more Dolce & Gabbana looks.

It is reported that the couple met through their mutual friend Dr Liam Fox, a politician in Britain. Lady Kitty is a patron of a charity he founded, Give Us Time, which donates holidays for soldiers in need. Lewis also donated thousands to Fox’s defunct Atlantic Bridge organisation.

When not at Lewis’ £19 million mansion in central London, the couple has been enjoying a series of holidays in romantic locations including Capri in Italy and The Hamptons, in New York state and of course, Cape Town.