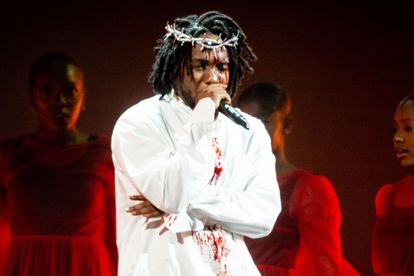 Kendrick Lamar closed out the 2022 Glastonbury Festival on 26 June while wearing a diamond-encrusted crown. Image via Twitter @PigsAndPlans

Kendrick Lamar closed out the 2022 Glastonbury Festival on 26 June while wearing a diamond-encrusted crown. Image via Twitter @PigsAndPlans

Lamar performed some music from his fifth studio album, Mr Morale & the Big Steppers and dazzled the audience in a diamond-encrusted crown made with 8 000 diamonds.

Kendrick Lamar was set to perform at the Glastonbury Festival in 2020, but the show was postponed due to the COVID-19 pandemic. Two years later, Lamar took the stage in full force. This marks one of Lamar’s few performances since releasing Mr Morale & the Big Steppers.

Apart from performing some of his newer tracks, including N95 and Savior, the 35-year-old rapper also performed his chart-topping single from his Damn album, Humble.

Lamar also close off his performance with a few words about the United States Supreme Court’s decision to overturn Roe vs Wade, a ruling that protects a woman’s right to have an abortion.

According to Vogue, Kendrick Lamar’s diamond-encrusted crown was a collaboration between jeweller Tiffany & Co and Lamar’s longtime collaborator Dave Free who explained that the crown is a “godly representation of hood philosophies” told from a youthful lens.

Tiffany & Co says the crown is used as a metaphor for artistic prowess, humility and perseverance and to Lamar, it serves as a “nod of respect” to the artists who have been in the industry before him.

The crown was designed over 10 months and includes 50 thorns and 8 000 cobblestone micro pavé diamonds. It took the manpower of four craftsmen who took 1 300 hours to create the one-of-a-kind piece.