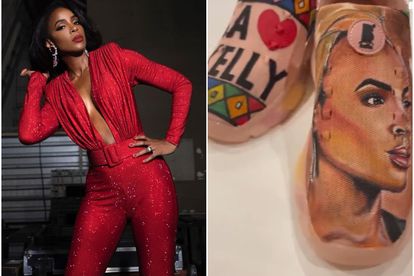 Kelly Rowland was gifted a personalised pair of Bathu sneakers during her trip in SA.
Image via Twitter
@kellyrowland

Kelly Rowland was gifted a personalised pair of Bathu sneakers during her trip in SA.
Image via Twitter
@kellyrowland

Despite Anele Mdoda’s shady comment about Kelly Rowland years back, South Africa has proven it has nothing but love for the US singer.

This, after scores of South Africans showed the Destiny’s Child star love on social media and in person following her whirlwind trip in the country.

They’ve even begged the star to come back soon!

On Easter Sunday – 17 April – Kelly jetted out of SA after spending a few days sightseeing and sampling the best our country has to offer.

According to Sunday World, Kelly was shooting a Brutal Fruit advertisement in the country.

Whilst in SA, Kelly Rowland showed her appreciation to homegrown talent by visiting local eateries and artist exhibitions.

On one foot, the canvas sneakers bears the beautiful face of Kelly. On the other, the words “SA [heart emoji] Kelly” are emblazoned along with Ndebele print.

In February, Riky ended his life after a long battle with depression.

The singer was also gifted a set of Thabootys lingerie by 947 host and businesswoman Thando Thabethe.

In addition, Kelly was treated to a few items from DJ ZInhle’s Era range too.