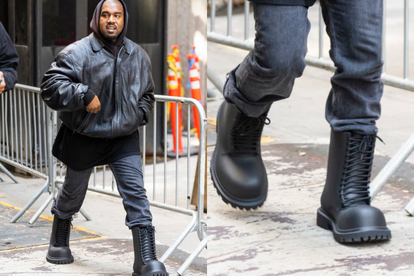 Kanye and his Balenciaga boots have gone viral. Images via Twitter: @HITC_Culture

Kanye and his Balenciaga boots have gone viral. Images via Twitter: @HITC_Culture

Kanye West has been going through a pretty weird fashion episode for quite some time now and seems to surprise people more and more each time he steps out of the house. The Grammy-winning rapper might’ve taken things just a little too far after he was spotted wearing what may possibly be the biggest boots anyone has ever worn.

The boots – which are Balenciaga – have resulted in the rapper getting thoroughly roasted on social media as people discuss his seemingly backward evolving fashion sense.

Kanye West has always had a questionable fashion sense that left many people questioning his mental health. The Easy rapper has once again become the centre of ridicule after he stepped out in some rather large Balenciaga boots.

The rapper was reportedly attending the Balenciaga Spine 23 fashion show.

Kanye and the boots – which Balenciaga has decided to call “Steroid Boots” – have now gone viral as many discuss the direction of fashion and how he is shaping it.

While they are described by the fashion house as “thick in volume but lightweight” – not many people can see themselves wearing it – unless it’s a weird dress-up party or something along those lines.

A plethora of jokes

Needless to say, netizens have thought of hundreds of ways to joke about the unorthodox footwear in various social media posts.

While some said they were perfect to step on enemies, others remarked that it looks quite similar to something one would see in a cartoon.

Here are some of those jokes:

“I need these boots from Kanye West, to step on my enemies.”

“I’m sorry, but If you believe those 🤡 boots @kanyewest is wearing are 🔥, you are clearly NOT a fashionable person. The dude needs mental help.”