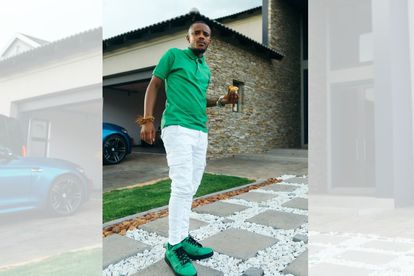 DJs Maphorisa and Kabza De Small are living their best lives right now; not only are they rich and famous, but they’re also in demand.

And of course, they have to look the part of as two of South Africa’s biggest music stars.

The dynamic duo love the finer things in life, including high-end luxury labels.

Kabza De Small recently showed off one of his biggest fashion purchases; a monogrammed Givenchy jacket.

The item – the Givenchy refracted logo jacquard wool jacket – retails for around R40 000!

Taking to his Instagram Stories, the DJ bragged about splurging on the black and red coat. He even cheekily laughed after telling his followers how much he spent on it.

The Jerusalema hitmaker splashed the cash at a Diesel store in Sandton to “get some drip”. This, after completing a successful tour in Europe where he returned with “a couple of Euros”.

Meanwhile fellow DJ Maphorisa boasted about his pair of Balenciaga shoes on his social media account. The DJ was seen wearing a pair of flashy sneakers which lit up and even changed colour.

Maphorisa showed of his Balenciaga men’s track LED sneakers which boasts a thick sole with integrated LED system. They retail for R22 000.

Who needs lighting when you have light-up sneakers!