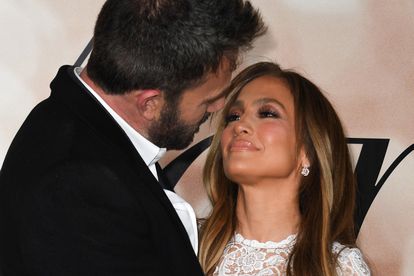 US actress Jennifer Lopez aka JLo and actor Ben Affleck arrive for a special screening of “Marry Me” at the Directors Guild of America (DGA) in Los Angeles, February 8, 2022.
Image by VALERIE MACON / AFP

US actress Jennifer Lopez aka JLo and actor Ben Affleck arrive for a special screening of “Marry Me” at the Directors Guild of America (DGA) in Los Angeles, February 8, 2022.
Image by VALERIE MACON / AFP

For the second time in weeks, Jennifer Lopez aka JLo, and partner Ben Affleck have married in a white wedding.

But this time, the high-profile celebrity couple went all out after tying the knot at Ben’s sprawling estate in Georgia on Saturday 20 August.

Last month, the pics of the couple’s low-key Las Vegas wedding was leaked on social media

The couple famously rekindled their romance last year after an almost 20-year split.

Like before, pics of JLo and Ben’s big day were leaked online.

In images likely taken by a drone, the couple was seen surrounded by friends and family – all dressed in white.

According to MailOnline, JLo’s third dress was by US designer Ralph Lauren and featured a long, dramatic veil, fitted body, and an elaborate feather skirt. The star had her long brown hair pulled back in a chic style and accessorised with pearl earrings.

Jen and Ben – who donned a black and white tuxedo – were seen posing for pics along the dock adjacent to his mansion. And their blended family – JLo’s twins Max and Emme and Ben’s children Violet, Seraphina, and Samuel – joined in too.

Last month, images of the couple at their intimate Las Vegas wedding went viral. The couple tied the knot at The Little White Chapel on 16 July after obtaining their marriage licence.

And JLo wore not one but two designer wedding dresses for the occasion. The first was a lacy frock by Alexander McQueen and the second was an off-shoulder gown by Zuhair Murad.

JLO AND BEN AFFLECK’S EXES ARE A NO-SHOW

But whilst fans are thrilled at the couple’s second chance, JLo’s ex Ojani does not think it will last. Speaking to Page Six, he said: “When we lay in bed on our wedding night, she said we would be together forever”.

Throwing more shade, he added: “I wish her and Ben the best, but I’m not convinced it will last. I can’t see her ever settling down with one person. She pushes herself to constantly go forward in her professional life, which is why she’s had a three-decade career, but she also moves on in her private life”

However, Ojani who was married to the star in 1997 for just 11 months – claimed that JLo’s mother Guadalupe Rodríguez may hold the key to her daughter’s happiness. He added: “If Ben has Lupe on his side then maybe he’s got a chance.”