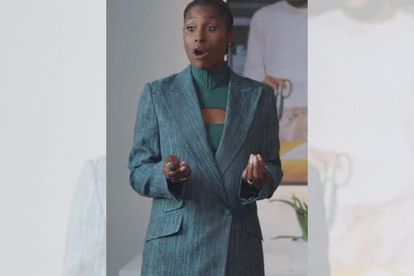 Issa Rae plays a strong and independent woman in the series Insecure, and naturally she has to have the wardrobe to match…

The star of the hit HBO series has been spotted wearing a suit from local designer Thebe Magugu in the latest episode, and South Africans everywhere are celebrating with a virtual fistpump.

During the second episode of the fifth and final season of Insecure, titled Growth, Okay, which aired last week, the star is seen wearing a “petrol green” skirt suit from Thebe’s 2020 autumn/winter collection.

What’s more significant than Issa wearing a proudly local design, is the fact that the gorgeous piece has a hidden meaning – which South Africans can relate to.

Thebe reveals the jacket has “South Africa’s constitution printed on the back lining, which is shown through an intentional tear”.

And it’s not the first time the star – who plays socially awkward activist Issa Dee – has worn the local label.

And Issa is big on supporting black designers too. In 2018, the actress became the first person of colour to host the Council of Fashion Designers of America Awards (CFDA Awards), and did so wearing five designs from black designers.

ISSA RAE: WHERE TO NEXT AFTER ‘INSECURE’?

This season may be the last we get to watch Issa Dee on out screens, but it certainly isn’t the last we see and hear of Issa Rae

The actress, filmmaker and writer has inked a five year deal with WarnerMedia valued at $40 million, which will give networks like HBO, HBO Max, and Warner Bros television exclusive rights to Issa’s television work and a first-look film deal

She told Variety of the deal: “They wifed me up

“When people believe in you and build with you, I tend to want to further that relationship. That’s just been a staple of mine with so many of the people that I work with, on various projects. So I’m looking forward to seeing what this marriage looks like.”

Issa is also set to star in a movie alongside Ashton Kutcher in a horror-thriller due for release in 2022.

ALSO READ: The votes are in! Here are the 100 greatest TV series of the 21st century