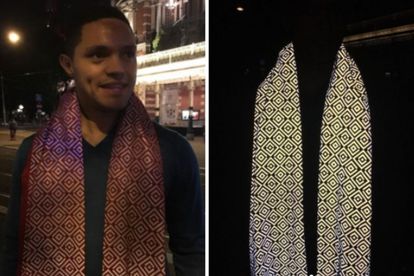 A scarf, made by a London-based company, Ishu, is making celebrities ‘invisible’ in photos. And the stars are obsessed.

How does the anti-paparazzi scarf work

The scarf, that has been worn by Paris Hilton, Cameron Diaz, Nick Jonas and SA’s very own Trevor Noah makes flash photography impossible.

The scarf is reportedly made up of highly reflective material using nano-spherical crystals coated with various alloys to produce a significant inverse retro-reflective coefficient.

According to BuzzFeed, the Ishu is the brainchild of Saif Siddiqui, who says he was inspired to create it in 2009 when a group photo of his was ruined by a bicycle reflector. Years and a bunch of research later, the highly reflective Ishu burst onto the scene and quickly made its way onto the heads and necks of prominent actors, musicians, and sports stars.

Drew Barrymore also tested it out on her talk show, saying that she loves a cloak of invisibility.

Watch: A cloak of invisibility?

Siddiqui is a former G.D. Goenka Public School student from New Delhi, who reportedly runs his business shuttling between London and Amsterdam.

“The main intention is to make people aware of how important privacy actually is. Everyone has a ‘brand’ online, and with the Ishu scarf, people are back in control of their privacy,” Siddiqui told BuzzFeed.

At the moment, the Ishu brand also sells jackets, phone cases, hats, face masks and clothing among many more items that will make you feel like a real celebrity.

Also read: A compilation – Proof that Trevor Noah is the master of accents [watch]