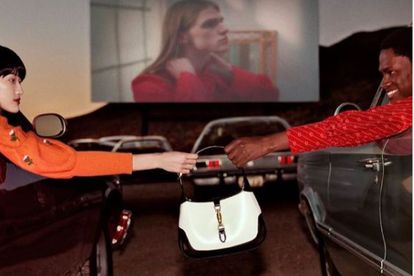 The Los Angeles-based model took to Instagram to express what a dream working with a high-end fashion house like Gucci is for him as he shared several images and videos with his 20 000 followers.

His first Gucci post is a campaign video that dates back to four weeks ago.

In the next post, Sethu is pictured beside model Sue-Ah as they both hold onto a bag while seated in their respective cars at a “drive-in”.

He thereafter shared an emotional post on what a dream that has been for him.

“what a dream…I’ve always had great admiration for the work of @alessandro_michele the first designer I got to personally work with when I started my modelling career 4 years ago ????????????Thank you for the love @gucci ????????????????made so many great memories and friends ♾ ♥,” wrote Sethu on Instagram.

MORE IMAGES OF SETHU IN HIS GUCCI COUTURE

Sethu shared more pictures of himself in Gucci couture.

This is not the model’s first international campaign. He has also modelled for other high end brands such as Fendi. He made his Fendi debut at Milan Fashion Week last year where he closed the show. As well as other big brands such as Versace, Dunhill, Valentino and more.

“Closing Milan Fashion week with a @fendi Debut lol????couldn’t have asked for a better ending???????? Major thanks to @fendi @silviaventurinifendi and @pg_dmcasting for a moment I’ll never forget. THANK YOU,” he wrote on Instagram.