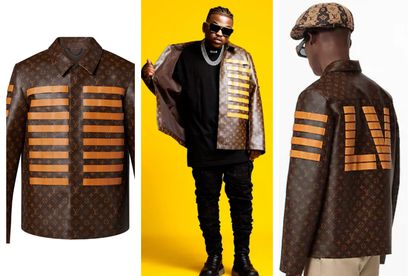 Whilst the country grapples with a high-unemployment rate, hunger, and food insecurity, South African rapper Focalistic has shown off his latest wardrobe splurge – a Louis Vuitton leather jacket worth over R100 000.

The 3310 hitmaker posted the promotional picture on his social media account as part of his North American Tour.

The piece -emblazoned with the famous LV monogram -is priced at an eye-watering R100 000!

It’s not the first time we’ve seen Focalistic splash his cash though. The star – who loves brands like Givenchy, Burberry, and Versace – spent over R60 000 on a Gucci GG supreme tracksuit.

On the music scene, other stars who love to spend on their style purchases are DJ Kabza De Small – who spent R40 000 on a Givenchy jacket – and Master KG who bought a leather jacket for R27 000.

Whilst Focalistic’s love of labels may have his fans impressed, others thought of better ways to spend their money.

@COMFORTFLASH: “Can somebody educate our artists about investment, properties, and businesses coming years some of our artists will be broke”

@Cruella31470236: “I’d rather invest in something than buy material things honestly, chasing wealth over public praise”

@mo_esha8: “He is saving some of the money right? We don’t want ‘guys let’s donate to help'”

He tweeted on Sunday 29 May: “Y’all are spending way too much money on these designer brands for you to just post/wear the outfit once! SM took the culture of ‘living for others’ to its apex. We are actually going through a global recession low-key, be savvy with that”.