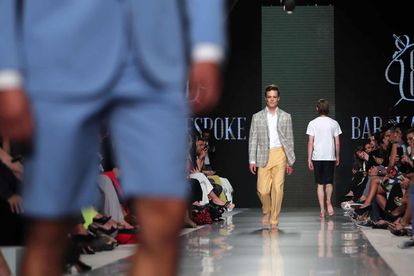 Past Arab Fashion Week shows were live events but it’s still not possible in a pandemic world. Image: Karim Sahib/AFP

Past Arab Fashion Week shows were live events but it’s still not possible in a pandemic world. Image: Karim Sahib/AFP

Designer Furne One of Amato Couture, loved in Dubai for his ethereal designs, opened the unprecedented event with a fall/winter 2021/2022 collection titled “The First Temptation”.

Set in the desert, the models all wore white, including lacy hoodies and pants. The traditional dishdasha robe worn by men across the Arab Gulf was featured. However, it was revisited with a slit down the front.

Watch as Amato Couture shows off its desert designs here:

“The world around us is changing, so too are attitudes towards fashion, and nowhere more so than in the Middle East,” said Mohammed Aqra, chief strategist at the Arab Fashion Council.

“Arab Fashion Week-Men’s presents the breadth of menswear beyond formal attire and street wear and paves the way for men in the Middle East to embrace a more adventurous wardrobe,” he added.

The council organised the event, which is being broadcast on YouTube for the three-day duration. About 15 regional and international designers, including from France, Britain, Iran and Lebanon, are being showcased.

Also on show Thursday were “Puro Teatro” (pure theatre) creations by Spanish designer Arturo Obegero, including high-rise pants, tops with crinkly waists and others with huge bow ties hanging from the back.

The first day of the Arab men’s fashion week also featured designs by Zardouz, including animal print shirts and pants, as well as others by Anomalous and Boyfriend The Brand.

Based in Dubai, the Arab Fashion Council represents all 22 members of the Arab League and is already behind the twice-yearly Arab Fashion Week, now in its 11th edition.

The council aims at promoting regional designers and the industry across the globe.

According to the Dubai Chamber of Commerce, menswear dominated the UAE apparel sector in 2018, amounting to $12.3bn (R186.1bn) in sales.