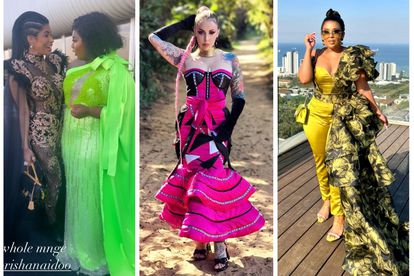 Stars of the RealHousewives of Durban showed off their best looks at the Durban July.
Image via Twitter

Stars of the RealHousewives of Durban showed off their best looks at the Durban July.
Image via Twitter

Whilst stars from all corners of South Africa descended upon the city, the cast of the Real Housewives of Durban (RHOD) were on home turf when it came to the Durban July…

The Showmax reality TV stars – known for their dramatic, no-nonsense, and downright catty escapades – showed off their looks at the Greyville Racecourse on Saturday 2 December.

LaConco, Sorisha Naidoo, Nonku Williams, Annie Mthembu and Jojo Robinson took to their social media platforms to show off the finest fashion money can buy at the glamorous event. And in typical RHOD fashion, the cast lived up to their reputations by trying to upstage each other with their interpretations of the theme “Show Me the Honey”.

But who is the ultimate queen bee? Take a look and decide…

REAL HOUSEWIVES OF DURBAN SHOW OFF THEIR DURBAN JULY LOOKS

A post shared by She Who Is Favoured ???? (@mrsannbition)